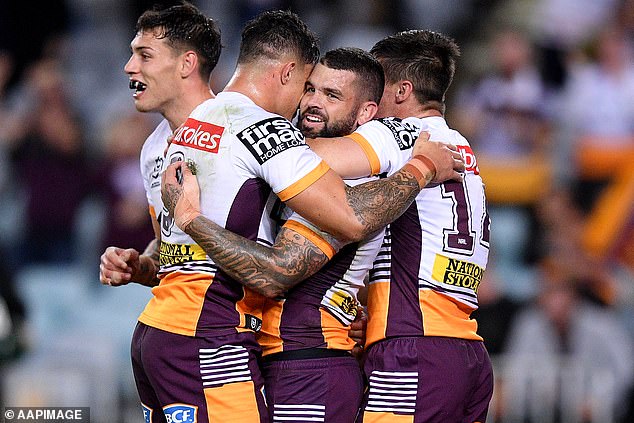 Adam Reynolds insisted last Thursday that his focus was very much on the future with the Broncos, but reports suggest his loved ones are still fuming with Souths over his acrimonious exit.

Reynolds parted ways with his boyhood club last season with the Rabbitoh’s hardline stance of offering a mere one-year deal forcing the 31-year-old to look elsewhere for a better contract.

The halfback switched to Brisbane and reminded his former side of his talents wih a virtuoso display in Round 9, scoring one try and setting up two more to help the Broncos to a 32-12 victory at Accor Stadium.

Reynolds was magnanimous in victory and said he knew it was the right time to move on, but radio personality Mark Levy has claimed that Reynolds’ family are ‘privately seething’ with the snub.

The 31-year-old – who put pen to paper on a three-year deal worth $2.4million with the Broncos – almost singlehandedly took Souths to the grand final last year.

‘I’m also a friend of the Reynolds’ family who are still privately seething after the club refused to budge on its one-year extension when Adam helped guide them to another grand final appearance, not to mention the fact he was living his childhood dream of playing for the South Sydney Rabbitohs,’ Levy told Wide World of Sports.

Reynolds waved goodbye to his boyhood club (L) last year after he was effectively forced out, joining the Broncos (R) this year

‘Whoever is responsible for the decision to allow a local junior and fan favourite, who bleeds red-and-green, to leave the Rabbitohs should hang their head in shame.

‘Was it the board, the CEO Blake Solly, outgoing coach Wayne Bennett, incoming coach Jason Demetriou or some knucklehead in the football department?’

‘It was completely disrespectful what they did to him,’ he said via Fox Sports.

‘It was disrespectful to let him go.’

Reynolds said on Thursday: ‘I am glad the week is over.’

‘I am sick of seeing my head in the headlines and my name in the stories.

‘The fact we’re getting better as a team is more important than my own performance. I’m just excited about what we’ve been building.’