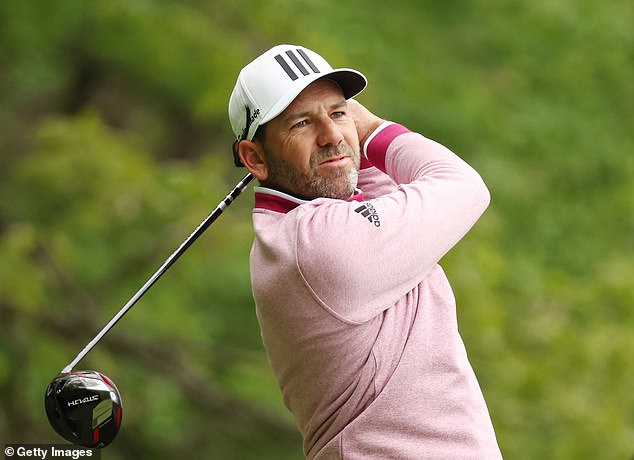 When it comes to the Saudi rebels and whose reputation will be tarnished the most, I clearly made a terrible mistake a few weeks ago in believing it would be a straight contest between Phil Mickelson and Greg Norman.

I had forgotten about Sergio Garcia.

Given how much he had whined in Dubai at the start of the year about the established tours denying him the chance to make more money, when he’s down to his last £100million in the bank, I must admit to feeling a tad embarrassed.

But, fair play to the temperamental Spaniard, he’s come roaring back into contention in a style so spectacular as to render null and void any chance of forgetting him in future.

‘I can’t wait to leave this tour!’ he screamed at a PGA Tour referee at the Wells Fargo Championship in Washington last week. ‘Two more weeks and I’ll be gone!’

You do feel sorry for Garcia, don’t you? The purgatory he’s had to put up with over the last 20 years in America, on his way to making $54m in prize money, plus a pension pot of at least twice that amount.

Bravo, Sergio. What a classless way to wave adios.

Say what you like about Lee Westwood’s decision to team up with this dubious band of mercenaries, but at least he’s doing so with a bit of dignity.

Over the next couple of days we should get an official release from the Saudi spokespeople as to the first confirmed names for the inaugural event at the Centurion Club in St Albans next month, and what a collection of poster boys it promises to be. Top of the list is Mickelson, of course. Will he return to the game and defend his US PGA Championship title at Southern Hills in Tulsa next week?

Phil Mickelson, 51, remains the Saudi mercenary who has tarnished his reputation the most

In a candid Five Clubs podcast, PGA of America CEO Seth Waugh admitted he wasn’t sure.

‘I think he’s figuring out the right time to return, and the game is trying to figure it out, too,’ said Waugh. ‘Is he up to it, mentally and physically?’

Bear in mind that the man he’s talking about is the oldest major winner in history. Mickelson should be coming to the end of a year-long lap of honour where he’s been celebrated far and wide for his incredible achievement in claiming his sixth Grand Slam title at Kiawah Island last May, just shy of his 51st birthday.

‘I’ve known him for a long time and he’s a complicated man with complicated thoughts,’ added Waugh. That’s one way of putting it.

When it comes to the Saudi hall of shame, therefore, Mickelson remains in a clear lead. But let’s not rule out Sergio just yet. I’m pretty confident that we haven’t heard the last when it comes to his unbearable sense of entitlement.

McIlroy’s back… but so are his doubters!

Is there another player who divides opinion as to how good he is quite like Rory McIlroy? On Sunday, the Northern Irishman followed up his runner-up finish at the Masters with another top-five showing, — the first time since before the pandemic that he had mustered two such placings in succession.

All good signs leading up to the US PGA Championship next week, therefore, where he will seek to end his eight-year drought in the majors? Not as far as a sizeable contingent who tuned into the golf on Sky Sports were concerned.

Asked how many majors McIlroy will end up winning, plenty settled on a total of four — the amount, of course, that he’s already claimed.

‘You’re a cheerful lot,’ was the dry verdict of the presenter, Nick Dougherty.

There is one sure way, of course, for McIlroy to turn doubters into believers, and he could hardly be in a better frame of mind heading into the three majors being staged over the next nine hectic weeks.

Fitzpatrick sure to crack America

In nine starts in America this year Matt Fitzpatrick has finished in the top 18 no fewer than seven times, including a runner-up spot behind American Max Homa in Washington on Sunday.

‘A first win on US soil is only a matter of time,’ concluded a chorus of commentators. While Colin Montgomerie, who remained winless in America throughout his illustrious career, is a classic case in point that this is not necessarily true, you do get the feeling that a big week is overdue for the 27-year-old from Sheffield who is now the highest-ranked Englishman in the world rankings, in 18th place.

Perhaps it will come at the US Open at Brookline, near Boston next month. That just happens to be the venue where, nine years ago, he became the first Englishman in over a century to win the US Amateur Championship.

Mat Fitzpatrick is currently the highest-ranked Englishman in the world rankings, in 18th place