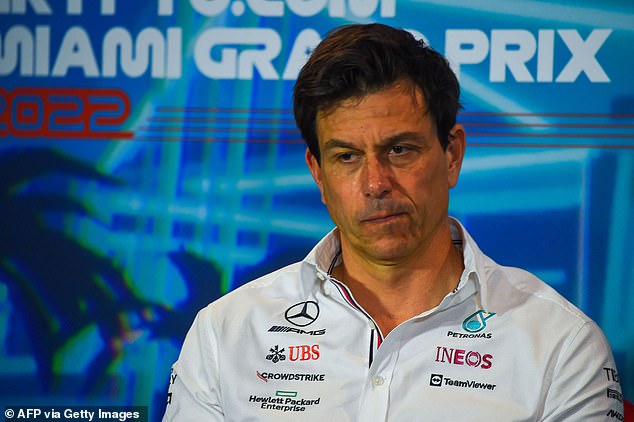 Mercedes boss Toto Wolff has admitted the team are still ‘flying in the fog’ with their new car as their disappointing season continued at the Miami Grand Prix.

Wolff conceded the car, which has caused problems for Mercedes drivers in the opening five races of the campaign, was ‘super-difficult to drive on the edge’.

While George Russell and world champion Lewis Hamilton were fifth and sixth respectively in Miami, the result nevertheless marked another frustrating outing for the Mercedes team.

Hamilton is among the drivers to have criticised the car and the Briton said after the race in the American city that the team haven’t been able to improve the vehicle.

‘We have been [struggling] straight from the beginning, flying in the fog a little bit,’ said Wolff.

‘And it is clear that there is potential in the car and she is fast but we just don’t understand how to unlock the potential.

‘It is a car that is probably super-difficult to drive on the edge, dipping in and out of the performance window, more out than in, and dissecting the data with a scalpel is just a painful process because it takes a long time.’

Mercedes have struggled with ‘porpoising’ – when a car bounces up and down – more than most others teams in the first part of the F1 season.

Wolff also claims there is a discrepancy between feedback from the drivers and the data from the car.

‘As a matter of fact, the data sometimes doesn’t show what the drivers tell us,’ he added.

‘Certainly, they have their hands full with a car that is just not at all comfortable to drive, nice to drive or predictable to drive but the data doesn’t show these big swings.

George Russell finished fifth in Miami, while Hamilton was a place further behind in sixth

‘We haven’t had this situation before in any of the years that it just didn’t correlate on the screens, what we see, with what the driver feels and that is making it even more difficult.’

Mercedes are third on the constructors leaderboard on 95 points, with Ferrari top on 157.

Russell is the highest-placed Mercedes driver in the F1 championship standings. The British driver is fourth on 59 points, 45 adrift of leader Charles Leclerc of Ferrari.