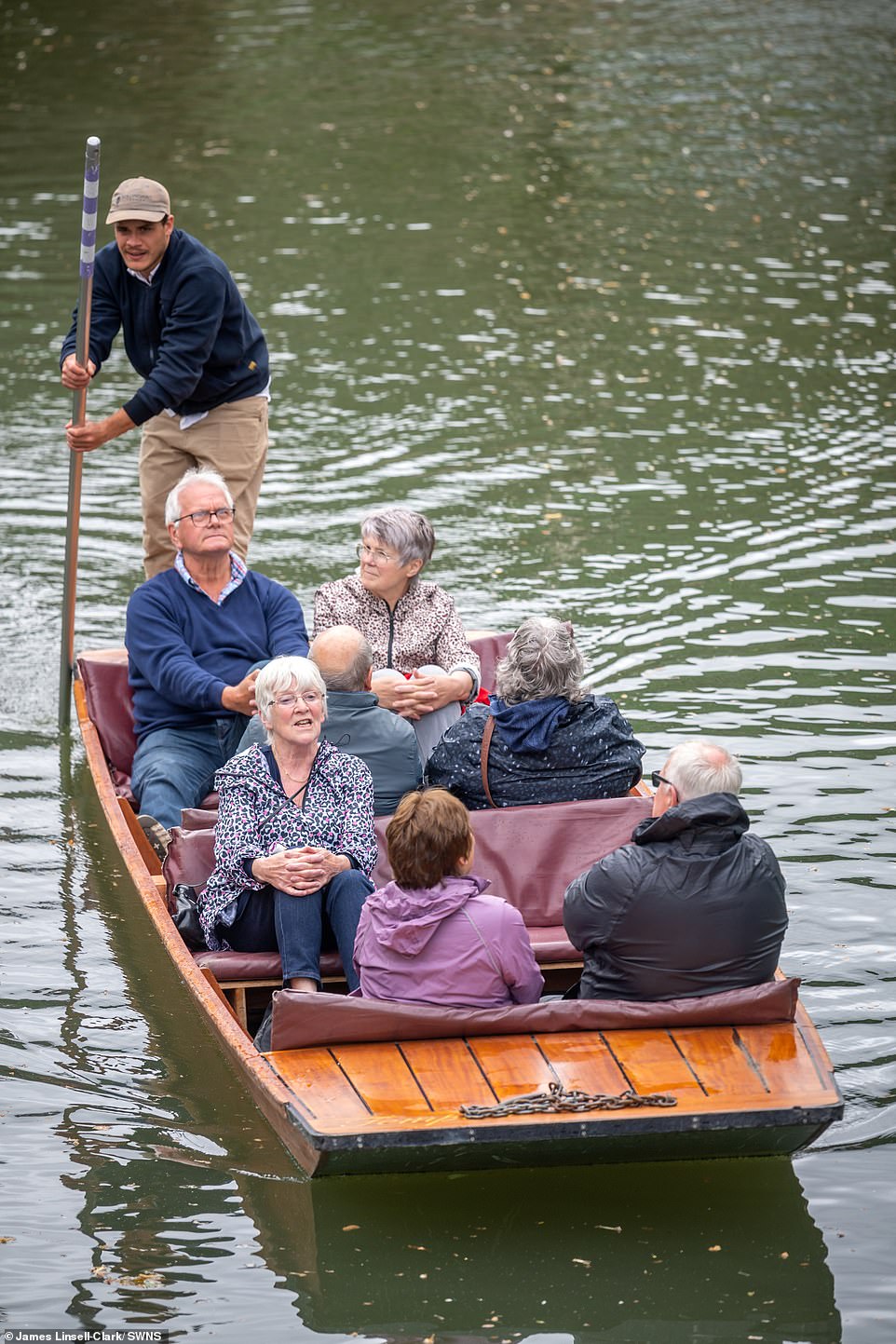 A sizzling weekend could see temperatures reach 25C on Sunday making it the hottest day of the year so far.

The glorious sunshine is set to arrive on Friday when temperatures could reach 21C, before getting warmer on Saturday and Sunday.

And although the Met Office said it is too early to tell if the country will bask in a heatwave next week, it has not been ruled out.

It comes as recent spells of balmy weather has seen the UK strawberry season arrive early with bigger and sweeter fruit.

Meanwhile, there will be cooler and breezier conditions on Tuesday, Wednesday and Thursday, before it heats up.

But on Sunday, we could see temperatures skyrocket to get into the ‘hot’ threshold, potentially reaching over 25C (77F).

Met Office spokesman Grahame Madge told MailOnline: ‘Over the next four days we’ve got unsettled weather, and as we get into the weekend, especially in the south, the weather will settle down. We look as if we’re heading into a period where temperatures will rise on the weekend.

‘There will be mid to high teens or above for most of the UK, with south east exceeding 20 perhaps.

‘And then by the weekend we’re getting up into the warmer temperatures.

People out punting on the river Cam in Cambridge on Tuesday which has seen some showers across the country. The UK is expecting a hot spell of weather towards the end of next week where temperatures could reach in to the mid 20s

A glimpse of what is to come: People pictured on the beach in Bournemouth on April 15 after temperatures reached the highest of the year so far at 23.4C (74.12F)

‘On Saturday I can see 24 for London, and on Sunday, 25, possibly something a bit higher.’

He continued: ‘In terms of a heatwave, there is a bit of uncertainty for now, as we are talking a week out from where we are now.

‘But over the weekend we’re to see low to mid 20s for most of the country.

‘Into the early part of next week we may see temperatures rising even further. It will be widely warm or very warm perhaps. It could reach hot temperatures in the south east by midweek next week.

‘Whether that extends into three days of the heatwave threshold being reached is debatable at the moment. There’s not the confidence to say just yet.

‘Whether it is a heatwave or not, it should be a very nice spell of weather to enjoy.’

In order for a bout of good weather to become a ‘heatwave’, we must see at least three days of 25C (77F), Mr Madge added.

Until the weekend, the Met Office says there will be cooler temperatures. Tourists are pictured on Tuesday wrapped up as they braved the rain to go punting on the River Cam in Cambridge

‘I don’t think we’re in that territory at all yet,’ Mr Madge said.

‘It might feel quite warm but technically it might not reach that threshold as far as we’re concerned.

‘There is always a degree of uncertainty with weather forecasting that far out. None of this is guaranteed but by the time we get to the weekend, we will have a lot more confidence about next week, and be able to tell if we’re in heatwave threshold.’

The Met Office said that as always around this time of year, there is a high probability of showers due to the high pressure. Some of the showers could possibly be heavy and thundery.

‘Once you’ve got more heat in the system, you’re into the prospect of showers, possibly thundery,’ the Met Office said.

This weekend’s forecasted temperatures will be hotter than holiday hotspot Turkey, where it will be 23C (73.4F) on Sunday in Istanbul.

Cannes in France will only reach highs of 22C (71.6F) on Sunday, as well as Porto in Portugal, and Gibraltar.

Benidorm in Spain will see temperatures of 24C (75.2F) on Saturday and Sunday, with Greek island Santorini only just in the 20s with highs of 21C (69.8F) on both days over the weekend.

Huge crowds of sun-seekers enjoy a day out in Brighton at the start of Good Friday weekend, Friday April 15, 2022

Bournemouth university students Samira Al-Nasser (left) and Alice Hussein, both 23, soak up the Good Friday Sun on Bournemouth Beach in April, which saw the hottest temperatures of the year so far reaching 23.3C (73.94F)

Tourists wrapped up on Tuesday as they braved the rain to go punting on the River Cam in Cambridge. Many wore raincoats and huddled under umbrellas as they glided along the beautiful Backs in the university city of Cambridge.

The cloud and patchy rain are set to gradually clear southeast England today, then most southern areas should see sunshine this afternoon, according to the Met Office.

Rain, perhaps heavy, will cross some southern areas on Wednesday, although perhaps staying brighter and warmer across the far southeast. Northern areas are keeping the mix of sunny intervals and showers, with a breeze remaining in places.

Thursday will see the breezy and rather cloudy weather continue with some longer spells of rain covering northern areas of Britain.

Due to the fairly sunny weather the UK has seen this year, the British strawberry season has arrived early, with the crop sweeter and up by 50 per cent on this time last year due to the run of bright weather, producers say.

The fruit has ripened under approximately 166 hours of sunshine in April, 7 per cent above the average for the month, industry body British Summer Fruits said.

This increased sunlight has resulted in a boost to the crop’s natural sugar content and means supermarket shelves will be filled with the fruit by the middle of this month, compared with June last year.

People on the River Cam put blankets over themselves on a rainy day in Cambridge. The unsettled weather is likely to only last a few more days with glorious sunshine set to cover the country over the weekend

This weekend’s forecasted temperatures will be hotter than holiday hotspot Turkey, where it will be 23C (73.4F) on Sunday in Istanbul. Cannes in France will only reach highs of 22C (71.6F) on Sunday, as well as Porto in Portugal, and Gibraltar. But today’s weather was mostly wet and breezy. People pictured punting on the River Cam in Cambridge on Tuesday which has been overcast and showery

The brighter weather also means there are predicted to be 50 per cent more strawberries – a mix of glasshouse-grown and naturally on table tops in polytunnels – available next week compared to the same period last year, when the season was delayed by cold weather.

The news will also be particularly welcome for those planning to celebrate the Platinum Jubilee, when the Bank Holiday is forecast to see 5,000 tonnes of British strawberries bought that week.

The brighter weather also means there are predicted to be 50 per cent more strawberries – a mix of glasshouse-grown and naturally on table tops in polytunnels – available next week compared to the same period last year, when the season was delayed by cold weather (file photo)

‘This process makes the berries sweeter and is one of the main reasons for such good tasting fruit.’

‘Despite these challenges, British strawberries remain a true success story. The UK is totally self-sufficient in strawberries for the entire summer season which now runs from May to October as farms continue to advance growing techniques, such as large-scale glasshouse production for season extension. This allows us to offer shoppers locally-grown fresh berries for longer.’

The strawberry industry is now worth more than £769 million to the British economy, according to Kantar figures.