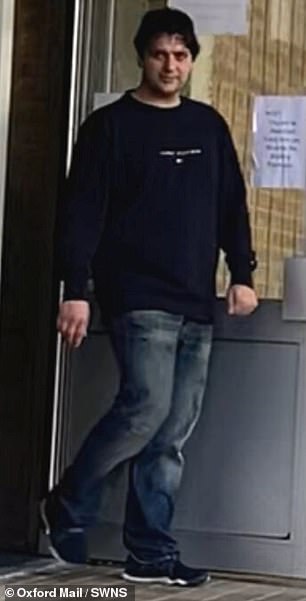 Cyclist used bank cards he found in the street that had been dropped by a FOX to buy £70 worth of cigarettes and alcohol, court hears

By Andrea Pluck For Mailonline

Hussain Qasim, 36, pictured leaving Oxford Magistrates’ Court on Wednesday (11 May). He was ordered to pay £250 compensation and a £22 victim surcharge

A cyclist has appeared in court for using bank cards found in a wallet that had been nabbed by a fox and then dropped in street.

The mischievous mammal helped itself to a wallet from under a car in Cowley, Oxfordshire, before ditching it.

Less than five minutes later, Qasim Hussain, 36, who was cycling down the road, discovered the fox’s loot and used the bank cards at the BP garage on Oxford Road to buy £70 worth of cigarettes and alcohol.

The opportunist attempted to use the card four times and it was eventually declined.

When the owner of the wallet noticed it had gone missing he decided to check his CCTV only to discover the foxy larcenist taking it from underneath his car at around 10pm. Footage then shows the cyclist making off with the goods.

He also admitted stealing £120-worth and £240 worth of chocolate from two nearby Sainsbury’s stores on separate occasions.

Hussain used the bank cards to purchase £70 worth of booze and cigarettes from the BP garage on Oxford Road, Cowley (pictured). The bank cards were declined after these transactions

He was in court last May for shoplifting and given a community order the year before.

Nawaz Khan, mitigating, said Hussain’s offense was purely opportunistic with the aid of the fox.

She explained: ‘Mr Hussain just happened to be passing by and rode over the wallet, stopped and found this credit card in there.

‘Unfortunately he does then succumb to temptation.’

The court heard Hussain had previously struggled with drug abuse but was now working with addiction charity Turning Point and receiving a methadone prescription.

He gave a clean drug test result on the morning of his court appearance and was described by Mr Khan as ‘a man who has changed in many ways’.

Imposing a 12 month conditional discharge, chairman of the bench Kay Whitaker said: ‘We have noted that you have a substantial and lengthy history of offending.

‘However, you have tried hard to reduce that and we are impressed you are attending Turning Point and impressed you have produced a negative test today.

‘I don’t underestimate the challenge of addressing a long-standing drug addiction.’

He was ordered to pay £250 compensation to Sainsbury’s and a £22 victim surcharge.