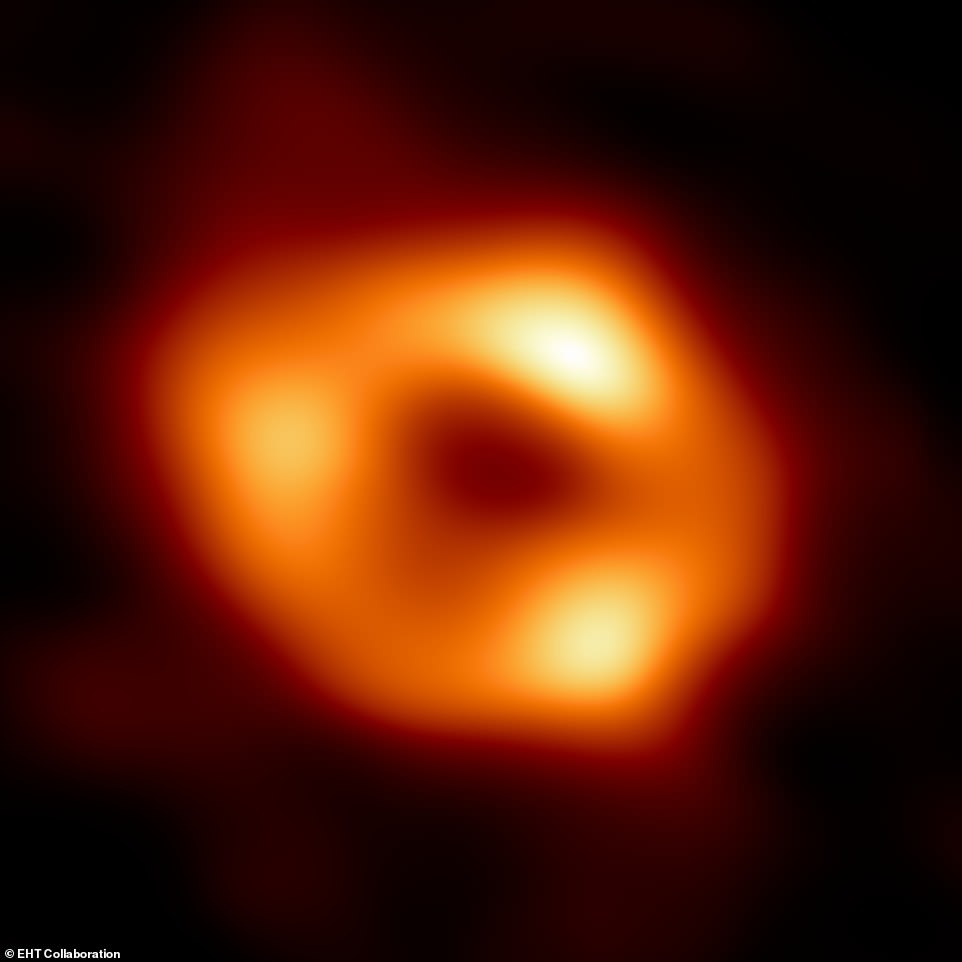 In an historic first, astronomers have captured a remarkable image of a supermassive black hole at the heart of our Milky Way galaxy.

The eagerly-anticipated picture, revealed to the world today, shows Sagittarius A* — which is roughly 4.3 million times the mass of our sun and is located about 27,000 light-years away from the Earth.

Because of its distance from us, experts said it appears the same size in the sky as a donut on the moon.

It comes just over three years after the same astronomers revealed the first ever photograph of a black hole.

The two black holes bear striking similarities, despite the fact that Sagittarius A* is 2,000 times smaller than Messier 87, which is located in a distant galaxy 55 million light-years away.

In a highly-anticipated string of press conferences held simultaneously around the world, the team behind the Event Horizon Telescope shared their findings after teasing a ‘groundbreaking Milky Way galaxy discovery’.

While announcing the new image, the University of Arizona’s Feryal Ozel called the black hole ‘the gentle giant in the centre of our galaxy’.

It was also described as ‘the glue that holds the galaxy together’.

Black holes are regions of space where the pull of gravity is so intense that nothing can escape, including light.

Therefore the image released depicts not the black hole itself, because it is completely dark, but the glowing gas that encircles the phenomenon in a bright ring of bending light, known as the accretion disc.

The ring is roughly the size of Mercury’s orbit around the sun, which is about 40 million miles (60 million km) across.

In an historic first, scientists have captured a remarkable image of a supermassive black hole at the heart of our Milky Way

The eagerly-anticipated picture, revealed to the world today, shows Sagittarius A* — which is roughly 4.3 million times the mass of our sun and is located about 27,000 light-years away from the Earth

In a highly-anticipated string of press conferences held simultaneously around the world, the team behind the Event Horizon Telescope shared the findings from their observations, calling the moment a ‘groundbreaking Milky Way galaxy discovery’

It comes just over three years after the same astronomers revealed the first ever photograph of a black hole, Messier 87 (pictured left). Sagittarius A* is shown right as a comparison

WHAT IS SAGITTARIUS A* AND HOW WAS IT CAUGHT ON CAMERA?

Sagittarius A* – abbreviated to Sgr A*, which is pronounced “sadge-ay-star” – owes its name to its detection in the direction of the constellation Sagittarius.

Its existence has been assumed since 1974, with the detection of an unusual radio source at the centre of the galaxy.

In the 1990s, astronomers mapped the orbits of the brightest stars near the centre of the Milky Way, confirming the presence of a supermassive compact object there – work that led to the 2020 Nobel Prize in Physics.

Though the presence of a black hole was thought to be the only plausible explanation, the new image provides the first direct visual proof.

Because it is 27,000 light years from Earth, it appears the same size in the sky as a donut on the moon.

Capturing images of such a faraway object required linking eight giant radio observatories across the planet to form a single ‘Earth-sized’ virtual telescope called the EHT.

These included the Institute for Millimeter Radio Astronomy (IRAM) 30-meter telescope in Spain, the most sensitive single antenna in the EHT network.

The EHT gazed at Sgr A* across multiple nights for many hours in a row – a similar idea to long-exposure photography and the same process used to produce the first image of a black hole, released in 2019.

That black hole is called M87* because it is in the Messier 87 galaxy.

Astronomers said the discovery provides overwhelming evidence that the object is indeed a black hole, and yields valuable clues about the workings of such giants, which are thought to reside at the centre of most galaxies.

Scientists had previously seen stars orbiting around something invisible, compact, and very massive at the centre of the Milky Way.

This strongly suggested that the object was a black hole, and today’s image provides the first direct visual evidence of it.

Although it is not possible to see the black hole itself, because it is completely dark, glowing gas around it reveals a telltale signature: a dark central region (called a shadow) surrounded by a bright ring-like structure.

The new view captures light bent by the powerful gravity of the black hole.

‘We were stunned by how well the size of the ring agreed with predictions from Einstein’s Theory of General Relativity,’ said EHT Project Scientist Geoffrey Bower from the Institute of Astronomy and Astrophysics, Academia Sinica, Taipei.

‘These unprecedented observations have greatly improved our understanding of what happens at the very centre of our galaxy, and offer new insights on how these giant black holes interact with their surroundings.’

The EHT team’s results are being published today in a special issue of The Astrophysical Journal Letters.

Dr Younsi, a UKRI Stephen Hawking Fellow at the UCL Mullard Space Science Laboratory, said: ‘Our results are the strongest evidence to date that a black hole resides at the centre of our galaxy.

‘This black hole is the glue that holds the galaxy together. It is key to our understanding of how the Milky Way formed and will evolve in the future.

‘Producing this image is the result of a monumental effort by hundreds of scientists over five years.

‘It was especially challenging because of the haze of stars, dust, and gas in between Earth and the galactic centre, as well as the fact that the pattern of light from Sgr A* changes quickly, over the course of minutes.

‘But now we have comprehensive findings, and this work opens a new chapter in our understanding of black holes.’

Messier 87 was described by scientists at the time as ‘a monster’, measuring some 24 billion miles (40 billion km) across — three million times the size of the Earth.

That was also imaged by the Event Horizon Telescope, a network of eight linked telescopes, showing a glowing ring of red, yellow and white surrounding a dark centre.

The astronomers said the discovery provides overwhelming evidence that the Sagittarius A* object is indeed a black hole, and yields valuable clues about the workings of such giants, which are thought to reside at the centre of most galaxies

The black hole was imaged by the Event Horizon Telescope (pictured), a network of eight linked telescopes

This artist’s impression shows the anatomy of a black hole, including its event horizon, singularity and accretion disc

WHAT IS AN EVENT HORIZON?

The event horizon is theoretical boundary around a black hole where not light or other radiation can escape.

When any of that material gets too close to the edge of the hole, known as the event horizon, its atoms are ripped apart.

The nuclei disappear below the horizon, the much lighter electrons get caught up in the black hole’s intense magnetic field and tosses them around at high speed.

This twisting motion causes them to release photons, which is the main source of emission from matter close to the black hole.

The observations from the Event Horizon Telescope can now be counted among of the most significant scientific breakthroughs of the century.

As well as looking alike, both Sgr A* and M87 behaved as predicted by Einstein’s 1915 theory of General Relativity, which holds that the force of gravity results from the curvature of space and time, and cosmic objects change this geometry.

Despite the fact Sgr A* is much closer to us, astronomers said imaging it presented unique challenges.

Gas in the vicinity of both black holes moves at the same speed, close to the speed of light. But while it took days and weeks to orbit the larger M87*, it completed rounds of Sgr A* in just minutes.

The brightness and pattern of the gas around Sgr A* changed rapidly as the team observed it, ‘a bit like trying to take a clear picture of a puppy quickly chasing its tail,’ said EHT scientist Chi-kwan Chan of the University of Arizona.

The researchers had to develop complex new tools to account for the moving targets.

The resulting image – the work of more than 300 researchers across 80 countries over a period of five years – is an average of multiple images that revealed the invisible monster lurking at the centre of the galaxy.

Scientists are now eager to compare the two black holes to test theories about how gasses behave around them — a poorly understood phenomenon thought to play a role in the formation of new stars and galaxies.

Probing black holes – in particular their infinitely small and dense centres known as singularities, where Einstein’s equations break down – could help physicists deepen their understanding of gravity and develop a more advanced theory.

Black holes are extraordinarily dense objects with gravity so strong that not even light can escape, making viewing them quite challenging.

A black hole’s event horizon is the point of no return beyond which anything – stars, planets, gas, dust and all forms of electromagnetic radiation – gets dragged into oblivion.

The international collaboration that makes up the Event Horizon Telescope effort includes observatories in the South Pole, Europe, South America, Africa, North America, and Australia — all of which must be pointed directly at the object to measure the surrounding activity.

The project began in 2012 to try to directly observe the immediate environment of a black hole.

In 2019, scientists lifted the veil on the first images ever captured of a black hole. Pictured is M87, in the Virgo galaxy cluster

Thursday’s announcement was made in simultaneous news conferences in the US, Germany, China, Mexico, Chile, Japan and Taiwan.

There are different categories of black holes.

The smallest are so-called stellar-mass black holes formed by the collapse of massive individual stars at the ends of their life cycles, while there are also intermediate-mass black holes.

Finally there are the supermassive black holes that inhabit the centre of most galaxies. These are thought to arise relatively soon after their galaxies are formed, devouring enormous amounts of material to achieve colossal size.

The Milky Way is a spiral galaxy that contains at least 100 billion stars. Viewed from above or below it resembles a spinning pinwheel, with our sun situated on one of the spiral arms and Sagittarius A* located at the centre.

The M87 black hole is far more distant and massive than Sagittarius A*, situated about 54 million light-years from Earth with a mass 6.5 billion times that of our sun.

HOW DOES THE EVENT HORIZON TELESCOPE WORK?

Using a ‘virtual telescope’ built eight radio observatories positioned at different points on the globe, the team behind the Event Horizon Telescope has spent the last few years probing Sagittarius A*, the supermassive black hole at the heart of the Milky Way, and another target in the Virgo cluster of galaxies.

The observations relies on a network of widely spaced radio antennas.

These are all over the world — in the South Pole, Hawaii, Europe and America.

These radios mimics the aperture of a telescope that can produce the resolution needed to capture Sagittarius A.

At each of the radio stations there are large hard drives which will store the data.

These hard drives are then processed at the MIT Haystack Observatory just outside Boston, Massachusetts.

The effort is essentially working to capture a silhouette of a black hole, also commonly referred to as the black hole’s shadow.

This would be ‘its dark shape on a bright background of light coming from the surrounding matter, deformed by a strong spacetime curvature,’ the ETH team explains.