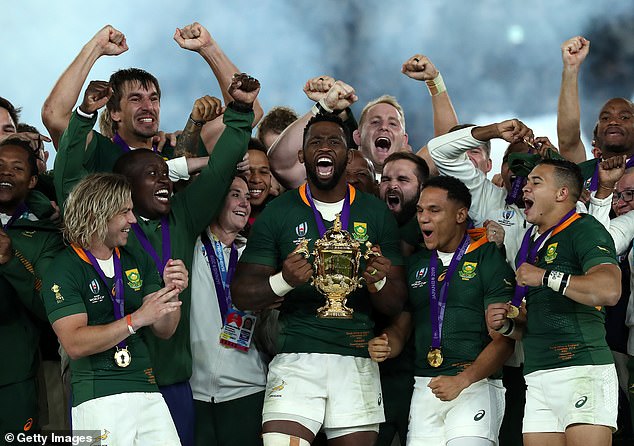 The Rugby World Cup goes stateside! The US are announced as hosts of the men’s tournament in 2031 and women’s event in 2033 as the game aims to tap into America’s sporting riches

By Will Kelleher For Mailonline

The Rugby World Cup will head to the USA for the first time after the game’s governing body laid out its plans for the next five global showpieces in both the men’s and women’s games.

The news was confirmed by World Rugby after a council meeting in Dublin on Thursday morning.

‘It is great for rugby, for fans and for the host nations. Today is a landmark moment for the sport and an exciting development for fans.

‘I would like to congratulate everyone involved in making this dream a reality as we look to deliver a truly global sport for all.’

On England winning the bid for the 2025 Women’s World Cup, RFU chief operating officer and chief finance officer Sue Day said: ‘We are thrilled to be hosting Rugby World Cup 2025. It is going to be incredible.

‘We would like to thank the government for their support in making this possible.

‘Working closely with government, UK Sport, Sport England and World Rugby together we will create a lasting legacy for women’s rugby in England, the UK and across the world both in terms of attracting more people to play and attracting new fans.

‘As we have seen from other home World Cups in cricket, hockey and netball, a Rugby World Cup will further advance all women’s sport.

‘The tournament will also deliver significant economic benefits right across the country. I can only imagine how proud we will be and how special it will feel to host the final at Twickenham.’