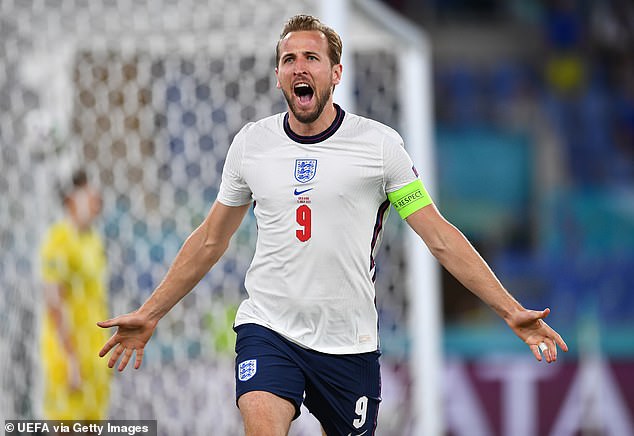 Renowned for his formidable goal scoring record, Harry Kane has earned a reputation as a world-class striker who sets an example on and off the pitch.

Yet, for the England captain, whose sporting heroes include David Beckham, Tiger Woods and American football star Tom Brady, making it to the top hasn’t always been a given.

He spent years out on loan at the likes of Leyton Orient, Millwall, Norwich City and Leicester City, before breaking his way into the Tottenham team – despite struggling during some of those loan spells and suffering a number of injury set-backs.

Making it to the top of the game was never a given for Kane, who struggled in the early stages

It was not plain sailing, that’s for sure, but he is now seen as one of the top strikers in the world and is on the verge of becoming an England great – sitting just four goals behind the nation’s all-time top goalscorer Wayne Rooney who has 53.

Kane mainly spent his first-ever loan spell sitting on the bench behind the likes of Alex Revell and Scott McGleish at the O’s during the 2010/11 season – but he did notch his first professional goal and go on to score five times in just 18 appearances.

Despite never really impressing at Brisbane Road, he made the step up to the Championship the following season on loan at Millwall, where he spent the second-half of the campaign after originally playing in the Europa League for Spurs and finding himself amongst the first-team.

His time at Millwall was more of a success, having scored nine times in 27 appearances to prove his ability in front of goal.

Norwich City was a very different story. After joining the Premier League side in August 2012, it became a disaster loan spell.

Kane suffered an injury, breaking a metatarsal bone in the League Cup against Doncaster Rovers in only his second appearance.

The then 19-year-old underwent his rehabilitation at Tottenham but returned to action for Norwich on December, 29 2012, coming off the bench at half time as Norwich lost 4-3 to Manchester City.

He only went on to make five appearances for Canaries in total, failing to score, before being re-called by Spurs in February.

It felt like Kane might get his chance to shine in north London, but only 12 days later he was sent out on loan to Leicester City for the rest of the campaign, where he struggled with just two goals in 15 appearances.

The 2012/13 season was the making of the world-class star we know of today as he broke into the Spurs first-team and notched 12 goals that season.

As the cliché goes, the rest was history, and it was truly was as he become one of the most prolific players in the world and won a golden boot at a World Cup – despite all of his early struggles.

The 28-year-old is now a huge role model across the country for budding footballers and he is always keen to lead by example and show why you should never give up on your dreams after going against the odds himself.

Not just on the pitch either, as he has tried to give back in everyway he can, including by sponsoring his former club Leyton Orient’s shirts with selected charities for the last two seasons.

Hence why the Museum of London has set up free display curated in collaboration with Kane to inspire the next generation and encourage visitors of all ages to be their best.

The ‘Harry Kane: I want to play football’ display will feature rarely seen personal items, family photos and iconic objects to document Harry’s career so far, which includes anything from his first club, to winning golden boot awards and being named England captain.

Kane grew up in Chingford, east London and lived just 15 minutes away from the Tottenham Hotspur stadium in north London.

He began his football journey at the age of six, playing with local London youth clubs Ridgeway Rovers and Gladstone Rangers.

Kane grew up in Chingford, just 15 minutes away from the Tottenham Hotspur Stadium

He began his journey at the age of six, playing with Ridgeway Rovers and Gladstone Rangers

The display captures Kane’s early years as a football fan and aspiring player, following him to play for three London clubs – Leyton Orient, Millwall and Tottenham Hotspur – through to his international career as captain of a history-making England side.

Kane said: ‘The Museum of London got in touch and wanted a Londoner to inspire young children to be their best so I am delighted to have all my memorabilia on show, with trophies, shirts, golden boots and some personal pieces which haven’t been seen publicly before.

‘I’ve got three kids now so I know how important it is to inspire the younger generation and help them understand how far you can go with hard work, dedication and self-belief.

‘The display runs until the World Cup and is free to enter so I’d encourage everyone to go down and see it if they have the chance.

‘There are some really special items in there – from my World Cup golden boot and MBE to the shirt and armband from my first game as England captain – which mean a lot to me.’

‘It’s important to highlight this story and how important work is at grassroots. With the men’s Euro final played right here in the capital, we also wanted to capture something from this moment.

‘We shouldn’t wait until something is in the past to celebrate it or tell the story in a museum – just like football we should all be in that moment together.

‘With the women’s Euros and World Cup coming up, this is a fantastic opportunity to learn more about a player that has risen through London’s grassroots football and what it takes to play at the highest level of the game.’

Alongside personal items, the display will include a changing room space where visitors can listen to Kane’s pre-match playlist.

There will be an interactive area where visitors can learn more about who has inspired Harry and share their own hopes and dreams.