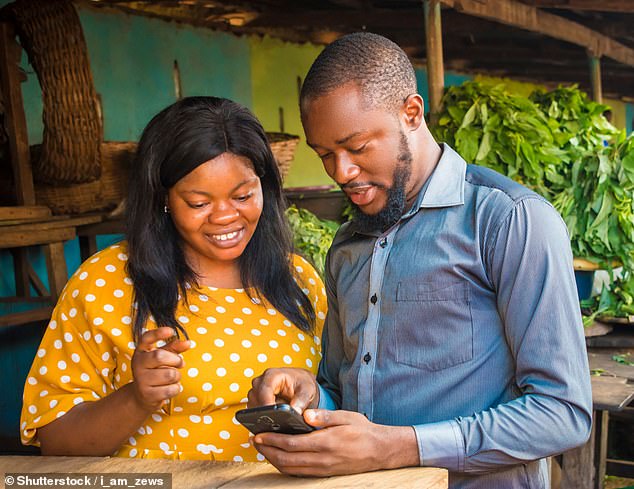 It is hard to believe that smartphones were invented less than 20 years ago. Back then, mobile phones were a luxury, even an oddity. Today, few people in this country can imagine life without one. In Africa, however, the situation is very different.

Little more than half the continent’s 1.4billion population have a mobile phone. Most of those – some 500million people – have rudimentary models that can just about make and receive calls or send text messages.

For Airtel Africa, this is a huge opportunity. The company operates in 14 countries across Africa, from Nigeria to Madagascar. The second largest telecoms business in Africa, it is also the leading provider of mobile money services, which allow customers to use their phone like a mini bank.

Networking: Airtel operates in 14 countries across Africa, from Nigeria to Madagascar

But the group still has fewer than 130million customers so the opportunity for growth is clear. And Airtel is better positioned than most to add new customers to its roster and help existing ones to move to smartphones.

The group has been investing heavily so it can offer the 4G connectivity which allows smartphones to access the internet swiftly and easily. Airtel also has thousands of tiny kiosks in rural areas, so that people can buy phones and related services without having to travel for miles.

Results for the year to March 31, released last week, showed that turnover rose 21 per cent to $4.7billion (£3.8billion), while profits rose 37 per cent to $1.5billion and the dividend climbed 25 per cent to 5 cents a share (equivalent to just over 4p for UK shareholders). Further strong growth is expected.

Africa has been hit hard, as the cost of food and fuel has soared. Against that, many people are now back at work following the pandemic so they are earning more than they have done in recent years.

Africa also has the youngest population in the world, most of whom are desperate to have a device which allows them to listen to music, watch TikTok and use SnapChat, just like children do here.

More importantly, phones offer African consumers a route to greater prosperity and better education, even if they live in remote villages or have never been able to obtain a bank account.

Midas verdict: Midas recommended Airtel in August 2020, when the shares were 57p. Today they are £1.38 and brokers believe they should rise to at least £1.60.

Any company operating in Africa carries an element of risk so cautious shareholders should take profits now. The more adventurous should hang on to their stock. Airtel is ambitious, growing fast and it is empowering millions of Africans along the way.