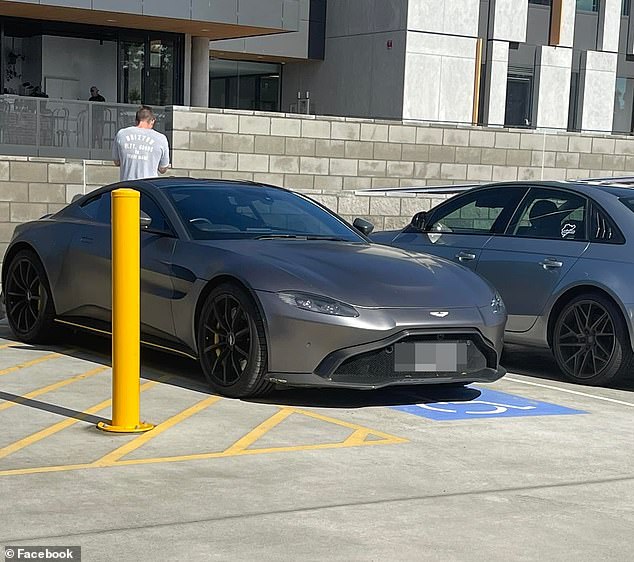 The driver of a $300,000 luxury car has been slammed online after parking in a disabled spot with bystanders saying no permit was displayed.

The Aston Martin Vantage had parked outside a cafe in North Wyong in NSW on Saturday in a bay with a clearly marked disabled sign with a bystander snapping a photo.

‘Disgusting, no permit and can’t park,’ the woman captioned the picture she shared to Facebook.

She elaborated that she had her wheelchair bound father with her and had to park at the other end of the carpark because the spot was taken.

The $300,000 Aston Martin was photographed parked in a disabled spot with the woman who took the picture saying no permit was displayed (pictured)

The photo sparked heated debate from more than 400 commenters with many saying the driver was disrespectful but other saying they might have had an excuse for not displaying their permit.

‘He can’t just park there because he feels entitled to. I hope someone walks past (and) scratches it to be honest, particularly because he is on the pedestrian area,’ one person said.

‘I agree they deserve some shaming if they’ve used this spot without a permit.’

‘It’s a wheelchair spot, not a rich prick’s parking spot,’ added a third.

But some said just because the car was luxury doesn’t mean the person was not disabled.

‘They might have just forgot to display the permit,’ one person said.

‘Its worth hundred of thousands of dollars – car can you blame him? Jealous people would open their door into side off his car making 15000 worth off damage in a lil dent,’ another added.

‘Could probably pay the fine with the change in the glove box,’ a third added.

The fine for parking in a disabled spot in NSW is $581 and one demerit point but this can be raised to $2,000 on an unsuccessful appeal.