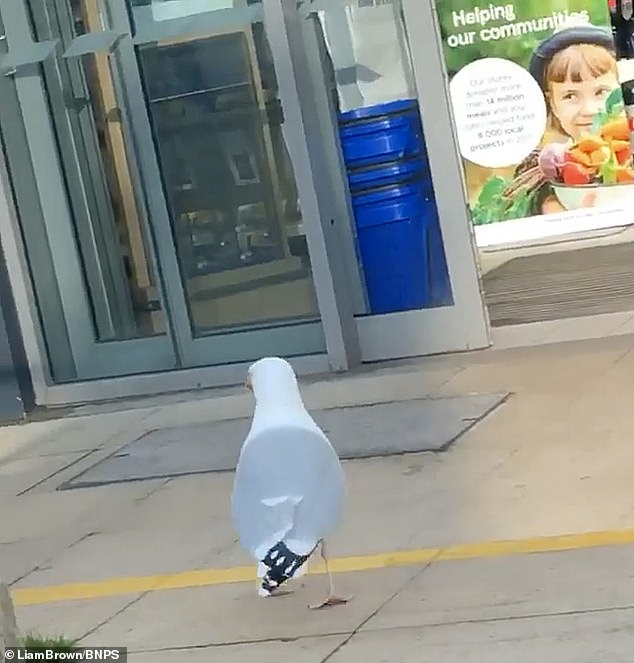 This is the hilarious moment a hungry seagull that is believed to have stolen £300 worth of snacks from a Tesco store makes off with its latest booty.

The serial shoplifter was spotted on camera loitering outside a Tesco Extra where it waited for the automatic doors to open.

The bird snuck inside and re-emerged moments later with a packet of Mini Cheddars in its beak.

It then scurried off down the street before staff could catch up with him.

The gull is so prolific that it is known to locals in Paignton, Devon, as ‘Steven Seagull’ after the Hollywood actor.

A serial shoplifting seagull from Paignton, Devon, has been caught on film making off with a pack of Mini Cheddars – as Tesco staff estimate the avian has cost them £300

The bird is partial to Mini Cheddars, Monster Munch and Tangy Cheese Doritos – with one witness saying they have seen ‘Steven Seagull’ share a pack of Doritos on a roof with a ‘mate’

Staff at the store say the bird has been known to strike three times in a day before.

According to conservative estimates, he is thought to have stolen around 17 kilos of food – or over £300 of stock – in a year, although the true total could be higher.

While he is partial to Monster Munch and Mini Cheddars, the highly particular gull also makes a beeline for Tangy Cheese Doritos.

Liam Brown, who took a video of the seagull during its latest shoplifting venture, said: ‘I’ve seen him go in a few times. This time he hopped onto my car bonnet so I started recording – I knew he was up to something.

‘He jumped down and started chewing gum off the floor, then he walked into the shop and ran off with a pack of Mini Cheddars’.

A member of staff at Tesco, who wished to remain anonymous, said the seagull’s visits were a ‘daily occurrence’.

She said: ‘It’s a common occurrence. We think it’s the same seagull.

‘It happens at least once a day – often three times.

The bird is a regular in the Tesco Express, with staff saying they are always ‘keeping an eye out’ for the thieving seagull

After loitering for a moment outside the automatic doors, the seagull entered the shop and made a beeline for the crisp aisle – clearly familiar with the store’s layout

‘We have to shoo him away because we don’t want to lose the stock.

‘We’re always keeping an eye out’.

Other locals familiar with the notorious seagull said they ‘couldn’t believe’ he was still at it.

Jenni Elliott said: ‘I’ve seen this happen too – he flew off with a bag of Doritos and shared them with a mate on a roof over the road’.

Lisa Buck, a regular at the store, said: ‘I’ve seen him do it. I told the cashier he’d just strutted off with a pack of Doritos and she said: ‘Oh, he likes those’.

Emma Paulson added: ‘I’ve seen this happen so many times’.