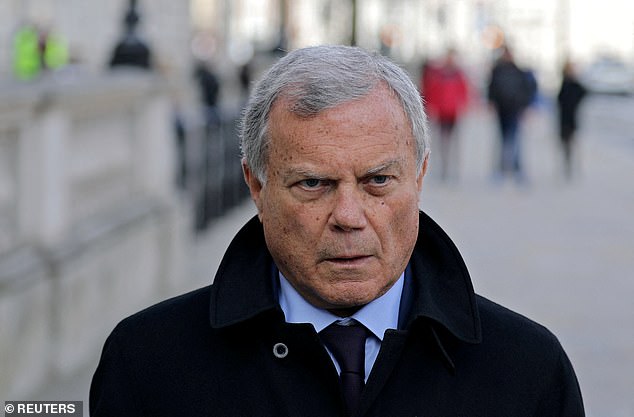 In its 2021 annual report yesterday the company said the senior officials had waived their bonuses.

‘Both the remuneration committee and the executive directors were disappointed that the earnings target was not achieved and, also acknowledging the delay in publication of the results, have agreed for 2021 that no bonus should be paid,’ the report said.

It follows a report over the weekend by the The Sunday Times which sent shares down yesterday 9.7 per cent, or 30.6p, to 285.4p. S4 Capital postponed its annual results twice because PwC, the auditor, could not complete its work due to a series of audit problems.

These included ‘control weaknesses, staff turnover and lack of detailed documentation’, largely at the MediaMonks content practice, the article said.

Last week Sorrell said the delays were ‘embarrassing and unacceptable’ when the firm finally published results. It plans to reappoint PwC as its auditor.

Sorrell has a powerful hold over S4 Capital as he owns controlling ‘B’ shares as well as a significant number of ordinary shares, after investing more than £50million.

‘The board has discussed the scope of my role and remains satisfied that it is appropriate for me to continue to act in a combined capacity as the executive chairman,’ he wrote in the annual report.

Last week he also warned that a perfect storm looms, with supply chain difficulties, the Ukraine war, the oil price and central bank policies meaning he is preparing for difficult times.

S4 Capital launched in 2018 after Sorrell stepped down from WPP, which he founded in 1985.

He has overseen the purchase of 29 media groups since, relying heavily on its previously buoyant share price to strike deals.

Many deals have been funded by the issue of shares rather than cash payments, which means that the drag on the share price has clouded prospects for further expansion.