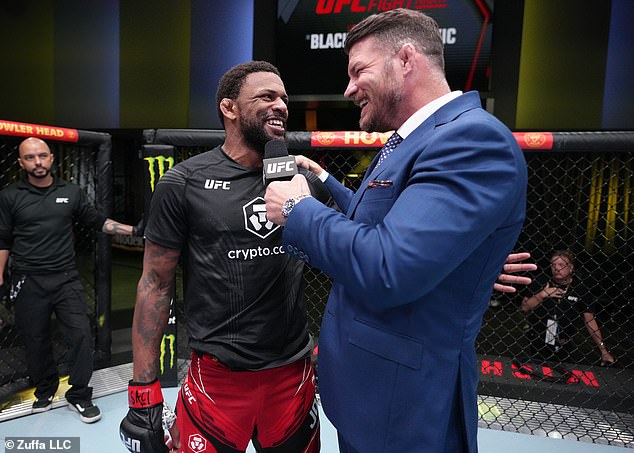 ‘Forget the job, I was fighting for my life’: Michael Johnson opens up on ‘dark hole’ and admits he was broke before snapping four-fight losing streak to rescue UFC career

Michael Johnson has admitted finding himself in ‘a dark hole’ and said he was ‘fighting for his life’ on Saturday night.

The former top UFC lightweight contender has been on a four-fight losing streak and even confessed to being broke.

Those dark times have engulfed Johnson in recent years but he managed to snap the skid with a knockout victory over Alan Patrick at the weekend. It was a win to rescue his UFC career.

Afterwards he reflected on the performance and the light it has brought to the darkness he felt surrounded him.

‘(I) went through so much to get to this point, a year and a half layoff, being broke, trying to figure out things. It feels good.

He continued: ‘You lost four in a row, something is going wrong. You end up being alone because your phone is not ringing enough, people are kind of turning their backs to you – which is a good thing, all the hangers just fall off themselves, so now you have time to focus on yourself and what do yo, but it’s great.

Johnson went as far as to say he was fighting for his life.

He explained: ‘F**k, I was fighting for my life, forget the job. I need to make ends meet. I need to be successful. This is where I get my main paycheck.

‘This is where I take care of myself and I can help my family and get through hard times. I definitely needed this to get back on track and get a little bit of weight off my shoulders. I wasn’t going to be satisfied with a decision win.

‘I needed to put on a statement and show and prove to everybody that I still got it. I’m not going anywhere. Hey, I’m 35, but I’m just getting better.’