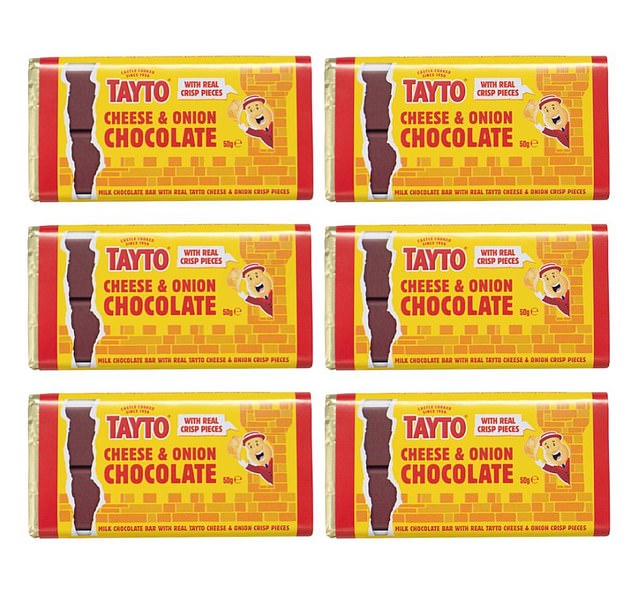 Would YOU buy a chocolate bar that tasted of cheese and onion? Limited edition hybrid treat made by crisp giant Tayto divides snack fans – with one calling it a ‘mouthful of pleasure’ but another other branding it ‘disgusting’

A snack that marries a bar of milk chocolate with a packet of cheese and onion crisps has left people in two camps; loving it or suggesting it’s a total taste turn-off.

Irish crisp giant Tayto is behind the salty-sweet hybrid concept, which has been released as a limited edition bar, with only 100,000 on sale.

Such is the early popularity of the unusual snack, which comes in a yellow and red bar, with a gold wrapper and the slogan ‘with real crisp pieces’, that it’s being sold at inflated prices on ebay.

Crisps AND chocolate: 100,000 bars of Tayto cheese and onion chocolate bars have been put on sale…with some snack lovers declaring the salt and sweet flavour union a hit

The company which owns Tayto, Largo Foods, admit that the flavour union is a divisive one but comes in response to a social media campaign from crisp fans, who begged the company to make the bar a reality.

Speaking to the Irish Independent, the company’s founder, Ray Coyle, suggested: ‘It’s a bit of fun, you will either love it or hate it, but our consumers asked for it and we said why not!’

On Twitter today, there was plenty of support for the bar.

@Rebgreenhalgh said: ‘I can confirm that this is a mouthful of pleasure.’

Two small bars on ebay will set you back around £6; as some try to capitalise on the chocolate bar’s limited edition status

@BenjamimWillard penned: ‘I’ve eaten one. Absolutely lovely and quite subtle flavour. Tayto make the finest cheese and onion crisps in the world.’

Others felt like the chocolate, cheese and onion treat, which uses chocolate from another Irish company, Butler’s, is just the latest version of a savory/sweet obsession.

@WalczakJon wrote: ‘It’s the next level, as Salted Caramel becomes ubiquitous, so savoury and sweet will evolve to this. If anyone wants it, here’s an idea, packet of cheese and onion crisps and small bar of milk chocolate is waaaay cheaper.’

Others though, admitted they found the idea beyond the culinary pale; @HelenSalmon2 wrote: ‘This sounds awful to me.’

@thrill_tweeter added: ‘The potential for humans to come up with crap masquerading as food is limitless – well done us.’