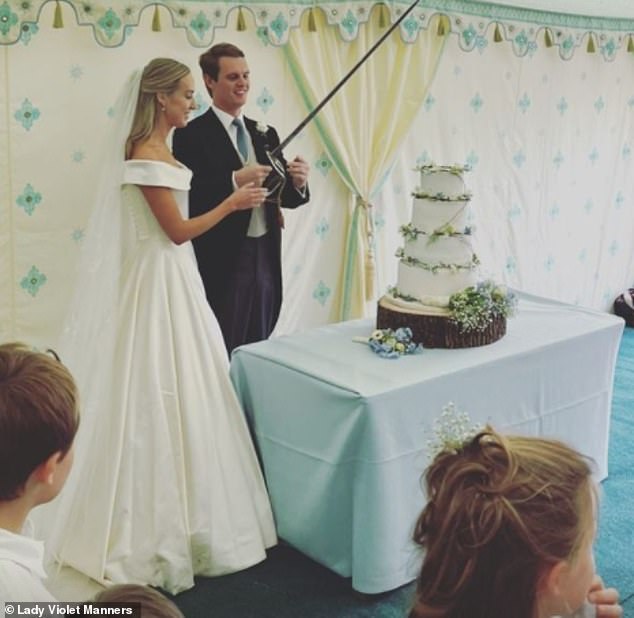 Chocolate heiress Jemima Cadbury was joined by high society pals as she wed entrepreneur David Tollemache over the weekend.

Jemima, who works for exclusive private members’ club Annabel’s, is the great-great-great-granddaughter of confectioner John Cadbury, while David is the nephew of Lord Tollemache of Helmingham Hall, in Suffolk.

The loved-up couple, who have been dating since 2016, and were joined by their nearest and dearest as they exchanged vows on Saturday.

Newlyweds! Chocolate heiress Jemima Cadbury was joined by high society pals as she wed entrepreneur David Tollemache over the weekend

Jemima kept details of her nuptials – including the venue – private but photos shared by her well-heeled friends suggest it was a suitably stylish affair.

She wore her blonde locks styled in a simple half-up do and kept her jewellery limited to a pair of delicate drop earrings.

The groom was dapper in a morning coat and sky blue tie.

After exchanging vows the couple celebrated with friends and family in a marquee, where they cut the four-tier wedding cake with a sword.

The day appeared to have a country theme with accents of blue and white. Both the bride and the flower girls held gypsophila, which also decorated the wedding cake.

Ready to go! Jemima kept details of her nuptials – including the venue – private but photos shared by her friends including Natalie Salmon (right) suggest it was a suitably stylish affair

Vibrant: The bride and groom were blessed with spring sunshine as they celebrated with friends including Sabrina Percy, left

Jemima, once dubbed one of the ‘movers and shakers’ of London’s social scene, said goodbye to single life with a fun hen weekend in the country last month.

For one evening of the hen weekend, the group each dressed up as Britney Spears, with the heiress opting for a red leather bodysuit, reminiscent of the one worn in Britney’s Oops I did it again video.

Both Jemima and her groom-to-be come from wealth – with David being the nephew of Lord Timothy Tollemache, who is 81, has had a Knight Commander of the Royal Victorian Order since 2015.

The Tollemache family are also patrons and presidents of several organisations.

David and Jemima have been dating for several years. Jemima works for the select member’s club Annabel in Mayfair, and David owns his own real estate company (pictured at a fundraising even for Starlight UK in 2019)

The pair are both outdoorsy and often share snaps of their weekend in nature, with David a keen sportsman

David, who loves to share glimpses of his active lifestyle on Instagram, completed the Blenheim Palace triathlon in 2020, with Jemima sharing a triumphant snap of his efforts.

Jemima and David are also known for their philanthropic engagements and have taken part in several fundraising events for several charities.

In 2019, the pair dazzled at an event at Blenheim Palace for the Starlight UK children charity.

And during lockdown last year, Jemima took part in the Cartier Over The Rainbow challenge, where the jewellery brand customers and fans to create artwork with the colours of the rainbow to support the NHS.

Hen party! Jemima, once dubbed one of the ‘movers and shakers’ of London’s social scene, said goodbye to single life with a fun hen weekend in the country last month

Jemima’s hen weekend was full of the typical accessories seen at hen weekends across the country, while this Cadbury heiress appropriately had her own personalised chocolate bar

Jemima, who works for the highly selective Annabel’s member’s club in Mayfair, dressed in a red vinyl outfit for the Britney themed hen do