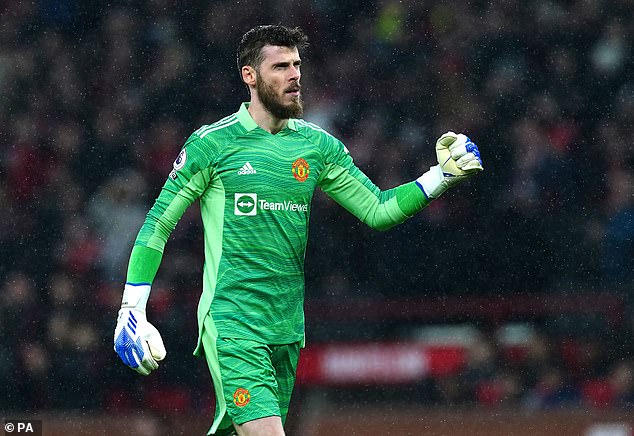 Manchester United goalkeeper David De Gea has scolded his ‘sloppy’ team-mates’ performances this season, and wants anyone who does not want to be part of Erik ten Hag’s rebuild to ‘just go’.

The Red Devils closed a torrid campaign on Sunday with a 1-0 defeat away at Crystal Palace – in front of their new Dutch manager – on the final day of the season.

West Ham’s defeat against Brighton spared United the ignominy of playing in next season’s Europa Conference League but they still finished 11 points behind fifth-place Arsenal and 13 adrift of the Champions League spots.

And speaking to MUTV, De Gea delivered a forthright assessment of United’s 2022 and said he wants to forget about the season and focus on the challenges come August with those who want to remain at the club.

‘The level we have shown in the last three or four months isn’t enough to win a Premier League match, we were sloppy, we lost some easy balls around our box, it’s impossible to win the games.

‘I just want to be positive, to forget about this season. The new manager [ten Hag] was in the stands, so that’s a good signal.

‘I hope things will get better for next season – that’s the past already. We all know it’s been a bad season, for everyone.

‘The people who don’t want to stay, just go.

‘And the people who really want to stay at the club, who want to fight for the club, let’s have a good rest in the summer, prepare ourselves in the mind and in the body and be ready to fight again next season.’

Sportsmail revealed last week the club are preparing for a summer clearout of players, with up to 10 first-team squad members up for sale.

However, speaking in his first interview as United boss, ten Hag offered a lifeline to the club’s underperforming flops – but warned good ‘will not be good enough’ in his tenure in the Old Trafford hotseat.

Asked what he sees in the future for United, Ten Hag said: ‘ ‘It’s first: accept the current situation but also know one year ago, this club, this team was second in the Premier League.

‘There’s potential and now it’s up to us to get that out. It’s a process, it will take time but I’m convinced we will come to that point where we get success. We have to work hard and it has to be based on the right philosophy and strategy.

‘I really look forward to doing this job, at this club with massive history, and we want to restore it where it belongs.’