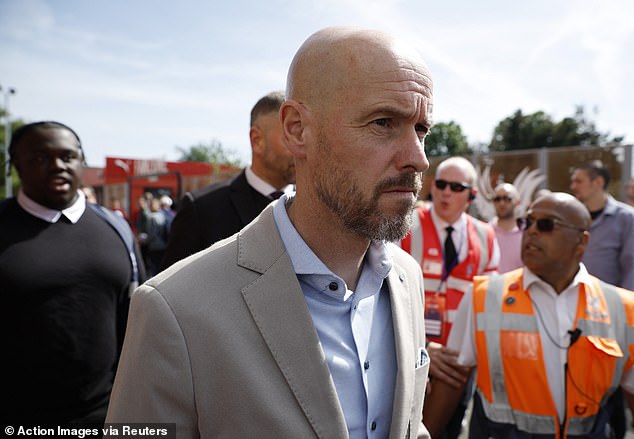 Still want the job, Erik? Ten Hag and new assistant Steve McClaren watch Manchester United lose at Crystal Palace on the final day of the season… as they take a closer look at the Red Devils before starting at Old Trafford

Erik ten Hag attended Manchester United’s final game of the season against Crystal Palace ahead of taking the manager’s job at Old Trafford.

The Dutchman is due to replace Ralf Rangnick at the helm this summer, but he got to work early by travelling to Selhurst Park to watch United play.

He was accompanied by Steve McClaren, who will join ten Hag in the dugout next term as a first-team coach.

McClaren is returning for his second spell at the club, having worked under Sir Alex Ferguson for the Red Devils between 1999 and 2001.

Ten Hag’s assistant, Mitchell van der Gaag, who was also his colleague at Ajax, was also in attendance to take in the action.

United still had something to play for at Palace as they look to end their wretched season on a high note and secure Europa League qualification.

However, Ten Hag’s presence in South London did not galvanise the Red Devils on the pitch, as they instead slumped to yet another defeat.

The 13-time Premier League champions were unable to finish in the top four, but they still had to claim three points to guarantee a place in the Europa League instead of the third-fiddle Europa Conference League.

Their defeat left the door open for West Ham, who went into the final day of the season trailing by two points in seventh place, to leapfrog them into the last Europa League spot.

Though fortunately for Ten Hag and his new coaching team, the Hammers were also handed a closing defeat in their outing away at Brighton, who scored three times after the interval to save United’s bacon.

Teenager Hannibal Mejbri was handed his first Premier League start for United on the day, giving him the opportunity to impress ten Hag and prove that he deserves to be in his plans next season.