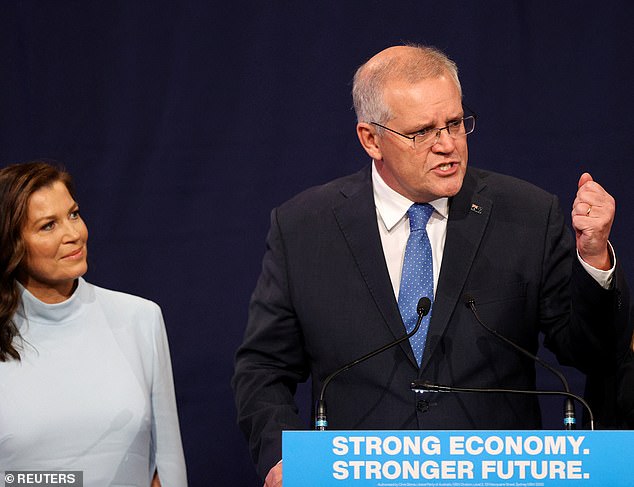 Broadcaster Alan Jones claims the election was lost ‘months ago’ for Scott Morrison because the former prime minister believed his own spin.

Speaking on his show on Tuesday night, Jones, an outspoken conservative, said the Liberals had lessons to learn from their election defeat.

‘No-one wants to be dancing on anyone’s political grave, but… Scott Morrison believed his own bull***t,’ Jones said.

‘It’s not in the last week that he couldn’t win, this election was lost months and months ago.’

Broadcaster Alan Jones said Scott Morrison’s election defeat was, in part, because he believed his own spin, though it fell short with voters (pictured: Mr Morrison and wife Jenny after being defeated on Saturday night)

Jones predicted weeks ago that Mr Morrison had ‘no hope’ of winning enough votes to see him retain his role as prime minister because he was out of favour with many Australians.

Back in 2019, Jones was the only political commentator to correctly back Mr Morrison in his underdog win against then-Labor leader Bill Shorten.

But in 2022, Mr Jones said the former PM was ‘the handbrake’ to the Coalition’s chances of victory at the polls.

‘The electorate hate him. His own cabinet don’t like him. The party know it but it was too late to make a change,’ Jones previously told Daily Mail Australia.

‘To keep government, he has to hold every seat he’s got and win two more. He’s no hope.’

Jones, 81, claimed while the government was busy ‘stopping people getting the flu’, Mr Albanese was conducting a successful grassroots campaign.

‘Anthony Albanese has been to every pub in Australia. They all know him now,’ he said.

Mr Albanese appeared on Mr Jones’ show at the beginning of the campaign, but the broadcaster claimed he was not yet a supporter of the new PM.

‘There are good people on both sides of politics, but unfortunately they’re not in leadership,’ he said.

Mr Morrison focused much of his campaign on painting his government as stronger on national security and better at managing the economy, which seemed to gain the Coalition some ground, but it did not translate to seats won.

The Liberals took a hit in particular from the so-called teal independents, who campaigned on a platform of equality, climate change action, and a federal corruption watchdog.

They were all issues the Morrison government claimed it was tackling but voters went to the polls on Saturday feeling they had been neglected.

The Coaliton steadfastly clung to a mantra of ‘transition’ when talking about a switch from fossil fuels, which sounded like concrete action yet conveniently left the door open for a delayed or lengthy process.

Both Liberal and Labor had committed to net zero carbon emissions by 2050 but the interim goal of the Coalition’s 26-28 per cent reduction by 2030 was dwarfed by Labor’s 43 per cent goal.

Similarly, Mr Morrison loudly commissioned the [email protected] report in the wake of the Brittany Higgins saga, but then failed to commit to implementing its many recommendations.

He formed his own streaming network, Australian Digital Holdings, which he now operates out of a renovated warehouse in Sydney’s Chippendale.

He claimed one of the things he was most excited about was being able to speak his unfiltered opinions.

‘At Sky I would get legal letters every afternoon telling me that I couldn’t say this or that,’ he said.

‘We would have to show them the script. The show would be ready to go at 4.30pm and a letter would arrive saying ‘you can’t say that’. In the end I thought, ‘I don’t need this’.’

New Prime Minister Anthony Albanese is on his way back to Australia after winding up the Quad world leaders’ summit in Japan, where he said discussions about democracy and regional security were on the agenda with the US president, Indian prime minister and Japanese prime minister.

‘There are many consistencies in Australia’s national security positions but there are some differences with the former Australian government particularly when it comes to climate change,’ he told reporters in Tokyo on Wednesday.

‘It’s been a very positive way to start a new government.’

The prime minister has been invited by his counterparts to visit the United States and India and says dates will be worked out soon to facilitate that.

Australia will host the Quad summit next year, he said.