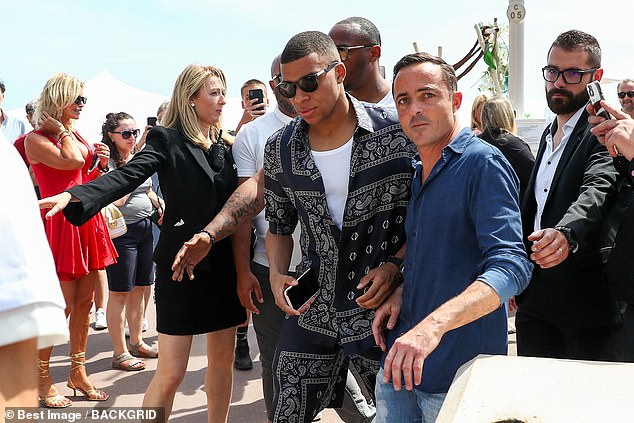 Are the drinks on you, Kylian?! PSG and France star Mbappe celebrates becoming the world’s best-paid footballer with a day in Cannes with team-mate Achraf Hakimi, days after signing his £650,000-per-week deal

Kylian Mbappe enjoyed some time off on the French Riviera days after committing his future to Paris Saint-Germain.

Speculation had been mounting about the star striker’s contract situation in recent weeks amid strong links to LaLiga giants Real Madrid with his original deal in France expiring this summer.

Fresh from putting an end to his contract saga by agreeing a staggering £650,000-per-week, three-year deal, Mbappe relaxed in Cannes on Wednesday alongside PSG team-mate Achraf Hakimi.

The PSG stars were seen at La Mome Plage restaurant in the sun-kissed resort during its renowned international film festival.

Mbappe shocked Real last Saturday by putting pen to paper on new terms to stay at the Parc des Princes.

‘I would like to announce that I have chosen to extend my contract at Paris Saint-Germain, and of course I am delighted,’ the 23-year-old said.

‘I am convinced that here I can continue to grow at a club that provides everything necessary to perform at the highest level.

‘I am also delighted to continue to play in France, the country where I was born, where I have grown up and where I have made my name.

‘I would like to thank the President, Nasser Al-Khelaifi, for his trust, his understanding and his patience.

‘I would also like to thank all the fans of Paris Saint-Germain, both in France and around the world, for their support, especially in recent months. Together, side by side and ambitious, we will make magic in Paris.’

Mbappe confirmed his contract renewal both through a video on Twitter and in person prior to the 5-0 rout of Metz, in which he netted a hat-trick.