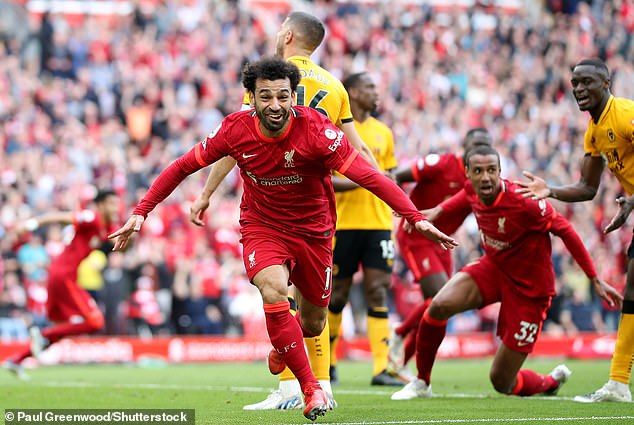 Barcelona legend Ronaldinho has urged Liverpool ace Mohamed Salah to make sure he is ‘happy’ whatever he decides to do next in his football career.

Salah’s future is up in the air on Merseyside with just one year to run on his current contract despite having starred since his 2017 arrival, scoring 155 goals in 252 games and having just won the Football Writers’ Player of the Year.

The 29-year-old is yet to agree a new deal with the Reds despite being their star man and guiding them to FA Cup and Carabao Cup glory already this season – all while notching 23 goals in the Premier League finish as the top-joint top goalscorer.

The forward could also potentially help Jurgen Klopp’s side win the Champions League when they face Real Madrid on Saturday to cap off a fantastic season.

Salah has, however, been heavily linked with a move away from Anfield as negotiations continue to drag on with most of Europe’s elite clubs on alert for any decision from the Egyptian.

Former AC Milan and PSG star Ronaldinho insists the most important thing for the forward is to be happy, regardless of what his future looks like.

The Brazilian, who is in Egypt following an invitation by Egyptian Premier League outfit Eastern Company to attend their clash with Al Ahly, was questioned by the media about the future of Salah.

‘An advice to Salah regarding his future? The most important thing is for him to be happy, football is a source of happiness and it must be no matter what club he plays for in the future,’ he said via Goal.

Ronaldinho, who made 145 appearances for Barcelona and scored 70 goals, also labelled Salah as one of the best players in the world.

‘I wished I could play alongside Mohamed [Salah],’ Ronaldinho continued. ‘He is one of the best players in the world, who I always like to watch.’

Liverpool will be eager to solve the futures of not just Salah, but Sadio Mane and Roberto Firmino as well once Saturday’s Champions League is out of the way.

Klopp, who signed his own contract extension recently, views both Mane and Salah as key players for Liverpool’s future.

‘You have to ask the boys,’ Klopp replied when asked about their futures earlier this month.

‘If it’s (me signing a new deal) is a positive sign for the boys, great, but I don’t think it will be decisive.

‘That’s more of a question for the boys, to be honest. But it’s all fine, I really think they are both great. They have more things to think about than the management, but it’s an important thing.

‘I have a great relationship with both boys.’