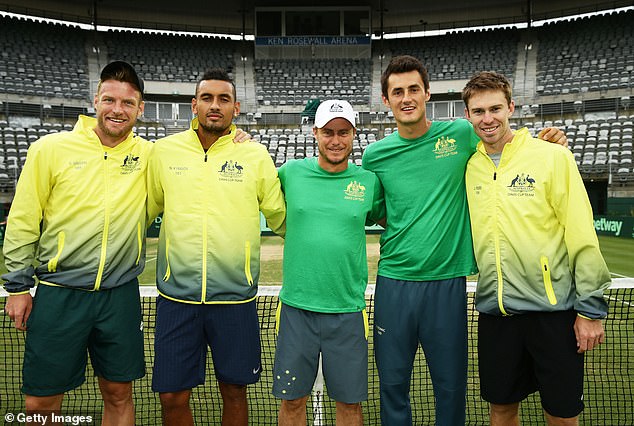 Nick Kyrgios has claimed Bernard Tomic is ‘the most hated athlete in Australia’ after his old rival said the reigning Australian Open men’s doubles champion has ‘always been living in my shadow’ as the pair’s feud reaches new heights.

The war of words erupted on social media after Kyrgios responded to a fan who claimed Tomic was the better player and said his old foe needs to ‘quiet down’.

Tomic then responded on Instagram on Wednesday night, mocking his former mate, who he claims only goads him because he is in awe of what he achieved on the court.

‘The only logical explanation is that I’m his idol. He’s always been in my shadow growing up,’ Tomic said in the video.

‘That’s why anytime someone mentions my name to him, it gets under his skin.’

The 29-year-old then bizarrely referenced his long-finished junior career, implying it was clear proof he was the better player.

‘He knows he can’t re-write history. The records that I set when I was 16, 17, 18, and 19 — youngest slam quarter-finalist at Wimbledon (since Boris Becker), the biggest tournament in the world,’ he said.

‘He knows my style dominates his and he knows he will lose.’

The blast was his reaction to Kyrgios’ claim last week Tomic is now essentially irrelevant when it comes to tennis.

‘Better in what way? I’ve got a higher career high [ranking]. More money, more wins and give back whenever I can,’ he said to the fan on Instagram who claimed Tomic was better.

‘It’s time for BT to just quiet down. He ain’t even playing anymore. I got years left.’

Kyrgios was far more scathing in response to Tomic’s video of Wednesday night, pointing out his lowly world ranking – he is currently 418th in the world, while Kyrgios is 76th – and lack of support in his home country.

‘Bernard, I didn’t realise it was this bad. I low key feel bad now,’ Kyrgios posted on his Instagram story, highlighting Tomic’s ranking.

‘Hit me up if you need me to help you remember how to play. Geezus.

‘Let’s not forget the time I payed for your flight home from Shanghai because you had no money.

‘Hahaha re write history, you are the most HATED athlete in Australia. You are right, no one can take over that,’ said Kyrgios, accompanied by a pair of crying laughing emojis.

Neither of the pair are competing in the French Open at the moment, though both are expected to play in Wimbledon this June and July.

Kyrgios is confident he can give the tournament a shake, recently labelling himself the best player in the world on grass, while Tomic declared in January he could win the title before he retired.

‘I can win Wimbledon. We all know this, I know this — I’m probably a top 10 player in the world on grass,’ he told A Current Affair earlier this year.

‘Time is running out. I’ve probably got four or five good years and I want to do this for myself … to finish it off the right way and retire happy and guilt free,’ said Tomic.

The pair have previously been good friends, but have fallen out spectacularly over the last five years

Tomic has spent much of the past year on the Challenger Tour, a tier below the ATP tour, while Kyrgios continues to rise up the rankings after starting the year outside the top 100.

No doubt there will be another page in the book of this riveting feud – so get the popcorn ready for the next round.