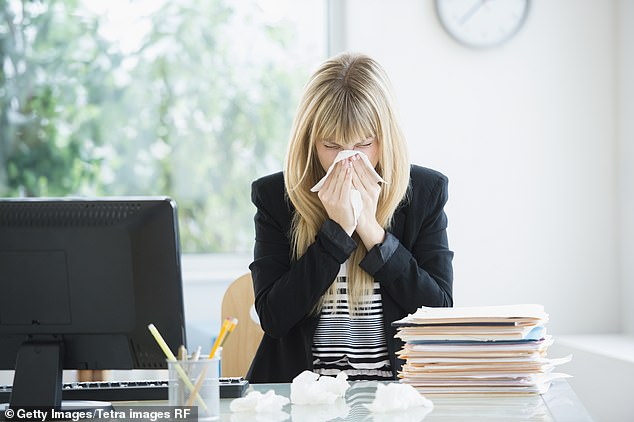 HEALTH NOTES: Eight out of ten woman admit going back to the office while feeling unwell as they do not want to use their sick days

By Mail on Sunday Reporter

Three-quarters of Britons go in to the office when they feel unwell –with a third worrying that their employers won’t believe they are sick. And women are the least likely to take time off, with almost 80 per cent admitting to going to work when poorly.

The trend is revealed in a survey conducted by medical negligence law firm Patient Claim Line, which asked 2,000 people about how much they worry about taking sick days.

Tim Scott, spokesman for the firm said: ‘The research demonstrates how unaware the majority of Britons are about their workplace rights.’ Employees are legally entitled to up to seven sick days in a row in the UK.

Women are the least likely to take time off, with almost 80 per cent admitting to going to work when poorly

A pulsating bracelet could reduce tics in people with Tourette’s syndrome.

Roughly 300,000 Britons have the neurological disorder, which is characterised by frequent, uncontrollable mannerisms such as shouting, twitching and clicking fingers – known as tics – but there are few effective treatments.

Now University of Nottingham scientists have developed wearable technology that has been shown to cut the frequency of tics by a third.

Worn on the wrist, the device delivers short bursts of electrical pulses which stimulate nerves that interrupt the brain signals that trigger tics.

A prototype will now be available to 135 UK patients on a trial basis.

Results are expected by the end of the year, and researchers hope a product will be available for use by 2024.

Seeking help for a severe mental health problem may help reduce the risk of developing physical problems too. US researchers analysed the health outcomes of more than 20,000 sufferers of post traumatic stress disorder (PTSD), which is triggered by a traumatic event and causes disturbing flashbacks and nightmares.

They found that those who received treatment not only saw improvements in symptoms, but were also significantly less likely to develop high blood pressure and type 2 diabetes over the course of a lifetime.

The researchers, from the Saint Louis University School of Medicine, said: ‘Educating patients about the physical health benefits of PTSD treatment may encourage more people to seek it out.’

A new drug for a type of arthritis that causes scabs on the skin can reduce those symptoms by up to 90 per cent, research has shown.

Psoriatic arthritis, which affects 100,000 Britons, features telltale signs of both arthritis and the skin condition psoriasis.

Current treatments like anti-inflammatory steroids don’t work for many patients, but trial data released last week by doctors at Harvard Medical School show that a drug called bimekizumab reduced psoriasis scabs in two-thirds of patients by 90 per cent.

Arthritic symptoms were reduced by 43 per cent.

Psoriatic arthritis, which affects 100,000 Britons, features telltale signs of both arthritis and the skin condition psoriasis (Pictured: A patient with psoriasis)