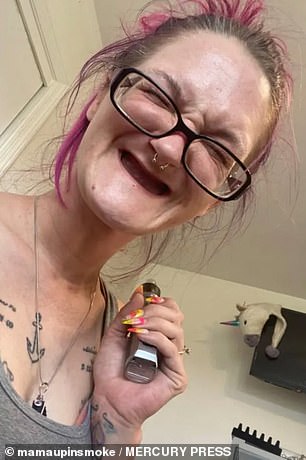 Mother, 31, who lost her teeth due to drug addiction is branded a catfish as she revals how different she looks with makeup and dentures

A mother has been called a ‘catfish’ after sharing how her appearance drastically changes when she wears makeup and dentures.

Ashley Butler, 31, from Tennessee, started to lose her teeth as a result of a drug addiction.

The delivery driver looks unrecognizable without her dentures and makeup but she couldn’t be happier to share her transformations online as she acts as a voice for those without teeth too.

The mother-of-four said: ‘I have been called a catfish, but I’m not as a catfish is someone who is pretending to be someone else.’

Catfish is a term made popular by the MTV series of the same name, and is used to describe someone who creates a fake identity or fictional persona online, often to lure people romantically.

Ashley Butler, 31, from Tennessee, has been called a ‘catfish’ as her appearance drastically changes when she wears makeup and dentures

‘I am always myself – with or without makeup. I put eye shadow, foundation and eyelashes on to make myself feel better – not to trick people,’ Ashley said.

‘I smile with and without my teeth. My dentures don’t define me. I feel comfortable in my own skin now because of the dentures.’

Ashley uses her social media platform to promote self love and acceptance.

She said: ‘My platform is for everybody – it is a safe place. I don’t judge anyone – you are who you are and I love everyone for who they are.

‘We all have a past and sadly I was addicted to crystal meth following a toxic relationship.

‘My tooth loss started with domestic violence and addiction took the remaining ones before extractions.

‘But that doesn’t mean I am ugly or a bad person. I wish people didn’t connect beauty with outside appearance.’

The extractions and dentures cost $9,328 but Ashley was lucky enough to have them paid for by a kind stranger.

Holding back the tears, Ashley said: ‘I had a free consultation at the dentist but I was unable to pay for the most basic dentures.

‘I remember crying in the reception and saying I will be back once I have saved around $4000.

‘The next day, they rang and said an anonymous donor has paid for the extractions and the best dentures they offer.’

Ashley had her teeth extracted in November 2020 and received her temporary dentures in September 2021.

She adds: ‘It still blows my mind that a stranger who overhead me in the dentist paid for them.

‘I didn’t think something like this could ever happen to me! Whoever it is saw worth in me and believed in me.

‘I didn’t think I deserved it. His or her kind gesture made me realise that I am a worthy of self love and respect.

‘It is the reason I try and bring positivity and happiness daily on my platform.

‘Most of the time I receive nice and positive comments but there’s always one who calls me a ‘junkie’ or ‘catfish’.

‘But that is just because they clearly feel insecure or unhappy with their own life.

‘Sometimes, people can only make themselves feel better by belittling others.

‘It’s sad but I don’t like the negative comments affect me.

‘I am who I am, I’m not trying to portray myself as anyone but me.’

Dentures are removable false teeth made of acrylic (plastic), nylon or metal.

They fit over the gums to replace missing teeth to give a full smile.

They also eliminate potential dental problems caused by gaps in the teeth, such as eating and speech.

Sometimes all the teeth need to be removed which is called complete dentures.

Partial dentures replace one or more missing teeth which usually clips onto some of your natural teeth via metal clasps.

Gums may need to be left to heal and alter in shape for months before dentures can be fitted after tooth extraction.

You can either see a dentist or a qualified clinical dental technician to have your dentures made and fitted.