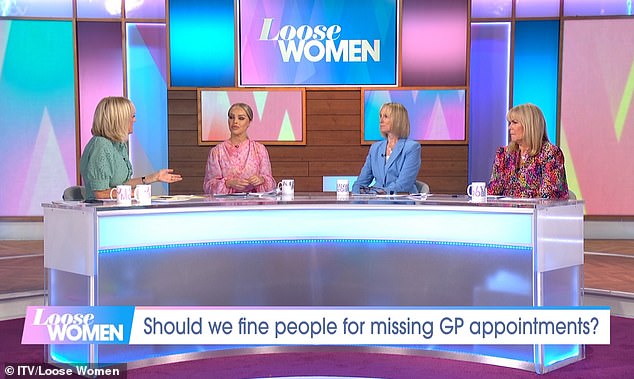 Should you be FINED for missing a GP appointment? Katie Piper insists patients should pay a deposit in Loose Women debate – but viewers say ‘you can never get through on the phone to cancel’

Katie Piper has today argued that people should have to pay a deposit or give card details to their GP, as it emerged that those missing their doctors appointments are costing the NHS millions.

Speaking during a debate on Loose Women, chaired by Jane Moore, 60, and with other panellists Linda Robson, 64,  and Carol McGiffin, 62,  the 38-year-old, from Andover, said that paying for treatments and seeing how much they cost have given her a different view on healthcare and made her value the appointments and doctors time.

However viewers were divided over the idea, with some noting it is almost impossible to get through to a surgery on the phone to cancel an appointment.

Discussing her own experiences, Katie said: ‘I have had a mixture of really good NHS treatment and some treatment for my eyesight I have had to have privately.

‘When you have to pay for operations, treatment or just prescriptions and eye drops and you see how much it is, it really gives you a different view on it.

Speaking during a debate on Loose Women, Katie Piper, 38, from Andover, said that paying for treatments and seeing how much they cost have given her a different view on healthcare and made her value the appointments and doctors time

‘I think there are some people who do not value those appointments. It is not just wasting professionals time its preventing other people getting that space.’

‘I think leaving a deposit or card details would make them take it up.’

Panel chair Jane Moore then revealed a statistic that currently there are 27,379 missed appointments per day, adding: ‘That gives you an idea of the scale of it.

Carol McGiffin then gave her view on the issue, agreeing that it is a ‘huge problem’.

‘I don’t know why people even think that they can just not turn up,’ she added.

Carol then continued: ‘It’s shocking really. But the whole fine thing you are assuming that the NHS is organised and that it can get this thing sorted out.

‘It can’t and it won’t. People won’t pay it. If you started to charge people before appointments, a small amount even, people would think twice before booking appointments and not take it.’

Discussing the experience of going into a GP, she said she had ‘never’ gone into a doctor’s surgery without having to wait and added that the staff are always very busy.

‘If someone does not turn up then that’s quite good for me because I do not have to wait so long.’

The rest of the panellists then discussed the possibility of a three strikes and you are out rule.

The premise was that if you keep missing appointments then you will get strikes and eventually have to find yourself a new doctor.

Social media reaction was mixed, with some thinking people should be charged for missing appointments but others saying that not everything should be about money – and pointed out it can be difficult to get through on the phone to cancel appointments.

One person said: ‘Yes people should be fined, but after calling to try and cxl mine today I couldn’t get through! 200 calls!’

Another person wrote: ‘If doctors get away with charging for missed appointments which to be fair we wait around two weeks for then shouldn’t we have the right to charge them when they are late for our appointment? Also people not turning up are probably to I’ll to get out of bed.’