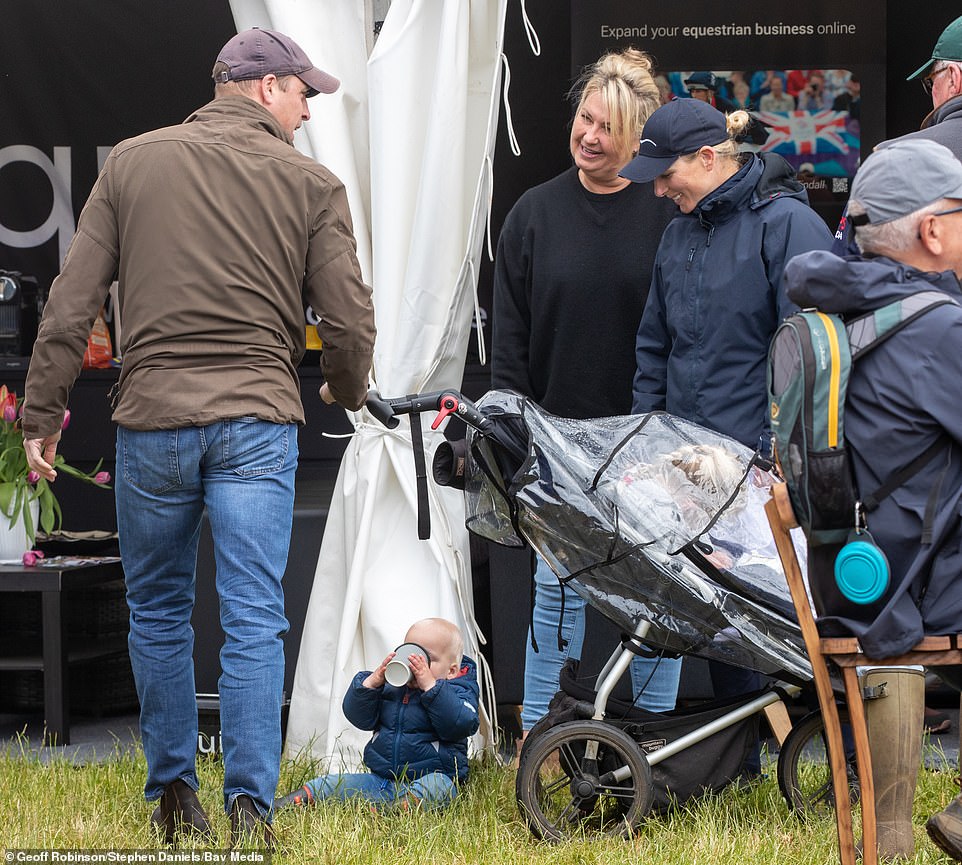 It was a Royal Family day out as Prince William joined the Tindalls at the Houghton Hall Horse Trials yesterday.

The Duke of Cambridge, 39, kept a low profile in a baseball cap and casual jacket as he joined his cousin Zara, 41, and her family at the weekend-long event near his country home of Anmer Hall on the Sandringham estate.

William, who will take a starring role in the Queen’s Platinum Jubilee celebrations this week, appeared in excellent spirits as he greeted ex-England rugby star Mike Tindall, 43, with a hug and crouched down to coo over Zara’s one-year-old son, Lucas.

The cousins enjoy a close relationship, even more so now they have children of a similar age. William shares George, eight, Charlotte, seven, and Louis, four, with wife Kate. Mike and Zara are also parents to eight-year-old Mia and three-year-old Lena.

Mia was on typically boisterous behaviour and was spotted tearing across the grass with a giant stuffed panda teddy. At one point she giggled wildly as she was lifted into the air by her ex-England rugby player dad.

Elsewhere toddling Lucas used a bicycle to steady himself as he went exploring across the grass, while Lena climbed into the pushchair for a nap.

Here comes uncle William! The Tindalls were joined by Zara’s cousin Prince William, pictured left from behind, who spent time with the family. The event was held a short drive from his country home at Anmer Hall, on the Sandringham estate

Family day out: The Queen’s granddaughter Zara Tindall, 41, was joined by her husband Mike, 43, and their three children Mia, eight, Lena, three, and one-year-old Lucas, for the weekend-long event in Norfolk

Mummy’s boy! Photos show toddling Lucas getting to grips with a bicycle before being wrapped up into his mother’s arms

Upsy-daisy! Mia was on typically boisterous behaviour and giggled wildly as she was lifted into the air by her father

What’s that? Lucas Tindall, who turned one this year, was spotted exploring a bicycle as he joined his sisters at the event

Growing up so fast! Zara beamed as she shared a moment with son Lucas (left) and carried him across the event site

On Saturday, one-year-old Lucas was seen taking his first steps in public on the first day of the Horse Trials, before being carried off by his big sister Mia, who was entrusted with money to pay for rides.

Lena beamed as she enjoyed a turn on the bungee ride – with watchful father Mike looking on.

Zara, who is an accomplished equestrian and Olympian, missed out on some of the fun as she was busy taking part in the events.

This weekend’s outings come as the royal, who does not have a HRH title, launched her own website to celebrate her sporting success. The glossy new site – zaratindall.com – makes no mention of her royal connection.

Family time: William kept a low profile in a country jacket and cap as he chatted to Zara, right, and her family at the event

What’s that? Little Lucas appeared interested in Prince William’s shoes as he played on the grass at the horse trials

Hi, Lucas! William, a father-of-three crouched down on the grass to speak to his cousin’s one-year-old son, pictured

Look how big you’ve gotten! William has a close relationship with his cousin Zara and is clearly fond of her children, too

I gotcha! Prince William (centre) is seen gesturing with his cousin’s husband Mike Tindall (left) as Zara looked on

Come here! As they were under the careful gaze of the former England rugby star’s wife Zara – who is, after all, William’s cousin – there was only one way it could end… with a man hug

The website was created by Equimi after Zara became a brand ambassador for the company, which designs online pages for equestrians. It features little mention of her family life, and no indication that her mother is the Princess Royal.

The page is also bannered by a Rolex advert, and lists and links to her many sponsors, including Landrover and Equine America.

Her bio reads: ‘Following the birth of her first child in January 2014, Zara was competing at the highest level once again just seven months later, going on to win a team silver medal at the 2014 World Equestrian Games in Normandy.

‘In April 2017 she finished third on High Kingdom at the Rolex Kentucky Three Day Event before going on to have her second child in Spring 2018.

Watching the action: Zara held onto her son Lucas as they watched the eventing alongside eight-year-old Mia, pictured

Horsing around! At one point Mike Tindall picked up his eight-year-old daughter Mia and carried her across the grass

Giving it a whirl! Adventurous Mia tried out an electric bike at one of the stalls while brother Lucas explored below

Zara has her hands full! Zara was keeping an eye on Lucas while daughter Lena, three, took a seat in his buggy behind

Busy day! Mike Tindall carried one-year-old Lucas on his back while three-year-old Lena waited for her parents

Tearing around: Eight-year-old Mia was carrying a panda teddy, while three-year-old Lena (right) went exploring with a stick

Royal rider! Zara Tindall was competing in the Houghton Hall Horse Trials, just a stone’s throw from the Sandringham estate

‘Since then Zara has been back competing regularly at National and International events.’

Zara also lists all eight of her current and former horses on the page, as well as a link to her results and a ‘news’ page with updates about her career.

Despite being the Queen’s eldest granddaughter, Zara doesn’t hold a HRH title and isn’t a working royal.

Through their work, Zara and Mike have managed to enjoy a ‘normal’ life – at least within royal circles – and live with their daughters in relative privacy, but still reap the benefits of lucrative contacts that they have secured, at least in part, thanks to their positions within the royal family.

The Tindalls also dedicate a significant amount of time to charitable causes and have phonebooks dotted with celebrity names.

Mia Tindall, eight, joined her siblings Lena, three and Lucas, one (pictured) on rides including the teacups as their father Mike watched on at the funfair in Norfolk on Saturday

The Tindalls’ one-year-old son Lucas was seen taking his first steps in public (left) at the funfair, before being carried off by his eight-year-old sister Mia (right)

Mike (pictured left) teamed a grey jacket with a cap and jeans for the fun day out, while wife Zara competed in the Houghton Hall Horse Trials

The former rugby player was seen walking around the grounds with one-year-old son Lucas (pictured left), who was keen to get involved in having fun with his sisters

Mia and Lena were spotted trying their luck on a card game, while Mike and Lucas cheered their efforts

Mia, Lena and Lucas appeared to be having fun as they gathered together on the tea cup ride