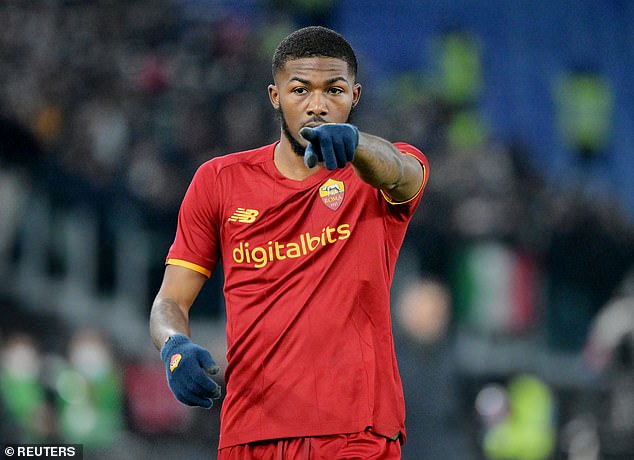 Jose Mourinho has said that Roma will ‘miss’ Ainsley Maitland-Niles with the Arsenal player returning to his parent club after a five-month loan spell with the Italian side.

Maitland Niles, 24, joined Roma on loan in January after struggling for game time under Mikel Arteta at Arsenal.

It had been suggested in January that the loan to Roma offered a potential path to a permanent move for the Englishman. However, the two clubs will not negotiate a deal and Maitland-Niles will return to north London.

Maitland-Niles posted on his Instagram account, alongside a picture of him holding the Europa Conference League trophy: ‘Great way to end the season.

‘Thank you to the Roma fans, players and staff for believing in me as one of their own for the short period of time spent at the club.

‘What [an] experience and to be a part of history with the club.’

The Englishman, who has made five appearances for his country, struggled to impress at Roma, making only eight appearances in the league across his spell there.

Despite this, Mourinho still offered a nice message to the young player on social media, writing: ‘We will miss you. One of us.’

Maitland-Niles, who last year had pleaded with Arsenal on social media to let him ‘go [some]where I’m wanted and where I’m gonna play’, had made the same number of appearances in the league for Arsenal prior to his January move.

The versatile player, who can play at full back, central midfield or out wide, now faces an uncertain future this summer with him seemingly being surplus to requirements at his parent club.

Arsenal had previously turned down what was reported to be a sizeable offer from Wolves, believing the player had the potential to form a key part of an increasingly youthful Gunners side moving forward.

However, a combination of some tumultuous years and Maitland-Niles perhaps not developing in the way many thought he would has stunted his growth at the club.

It has been suggested that Crystal Palace, under the tutelage of ex-Arsenal captain Patrick Vieira, could offer a route out of north London for the player.

Palace are rumoured to be in the market for a central midfielder and that is where Maitland-Niles is believed to want to play.