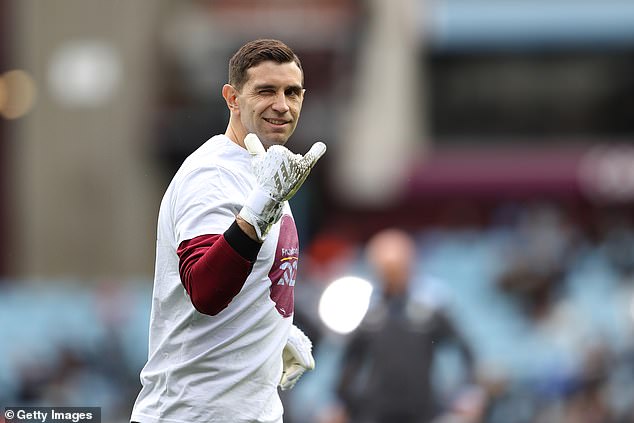 By Phil Casey For Mailonline

Aston Villa goalkeeper Emiliano Martinez has dismissed concerns about his fitness after he missed the final game of the Premier League season.

Martinez was left out of the squad in Villa’s 3-2 defeat to Manchester City and responded to rumours about him needing a knee operation in a press conference ahead of Argentina’s game against Italy at Wembley on Wednesday.

‘I don’t need anything,’ the 29-year-old Argentina keeper said.

‘I will be back for preseason’: Emiliano Martinez is close to a return despite his knee problems

‘I’ve been playing for two or three years without stopping but I have been discussing it with the doctors at the national team and I will be back for pre-season with Aston Villa on July 7.

Martinez has been one of Aston Villa’s most valuable players during the last two seasons following his £15 million move away from Arsenal in September 2020.

The Argentine featured in goal 36 out of 38 times throughout the Premier League campaign, keeping 11 clean sheets along the way.

On-loan goalkeeper Robin Olsen deputised for Martinez against Manchester City, having not featured between the sticks for Villa all season.

Anfield legend and Villa boss Steven Gerrard, who would have been keen to field his strongest possible side at the Etihad and aid Liverpool in their title challenge, admitted the decision to rest Martinez was taken out of his hands.

Speaking to Sky Sports before the Premier League showdown, he said: ‘If it was my decision, I’d be picking him.

‘He didn’t finish yesterday’s session, he walked in and the doctor has looked at him and ruled him out.’