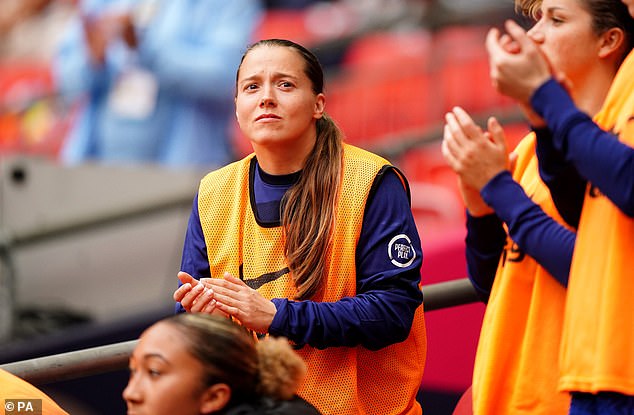 ‘I couldn’t even walk the dog for five minutes’: England star Fran Kirby reveals her fatigue nightmare that has ruled her out since February as the Chelsea forward says she will train in a ‘safe way’ to be fit for Euro 2022

England women’s star Frank Kirby has spoken out about her struggles with fatigue as she bids to return to the fold for Euro 2022 – admitting she even battled to take her dog out for a walk.

The Chelsea forward, who was diagnosed with a heart condition in 2019, has been out for more than two months due to her fitness issues, but is still hopeful of being fit for this summer’s tournament.

She was an unused substitute for Chelsea’ 3-2 FA Cup final win over Man City this month but has not featured for club or country since February.

Kirby said simple daily tasks became difficult for her and admits the spell has been ‘really tough’ – but is now feeling optimistic she can push on from here.

‘It’s been an interesting few months for me but I’m happy to be here and be involved,’ she told the BBC.

‘It was really tough. I’ve had previous experiences with illness so it was hard to take. At the time I wasn’t really caring about football or training but I think I dealt with it really well.

‘You lose a lot of stuff you usually do. I wasn’t even able to walk the dog for five minutes so it’s been nice to do that again. Hopefully now I can continue pushing.’

Kirby, who was diagnosed with a heart condition in 2019, said even walking her dog was tough

Kirby is now targeting a return to training but added she would have to be careful and undergo her sessions ‘in a safe way’ as she is gradually integrated with the rest of the players.

The women’s Euros, which will be staged in England, begins on July 6, so Kirby still has time on her side to get back to full fitness.

‘I feel good and hopefully I can be involved and get some training in,’ the 28-year-old said.

Kirby added: ‘I have to try hard but also do the right things to make sure things don’t happen again. I know I have to perform to be able to get back into the squad but also do it in a safe way.

‘I know my body now and what I can do. I’ve said to [England head coach] Sarina [Wiegman] and the coaching staff that I will be honest and I will know if I’m not right.’

Last month Kirby informed fans of her latest fitness setback, saying she had to put her health first but would be watching both her club and national side as a fan.

‘I’m sad that I have to write to you all another message like this.

‘With this being an on-going issue throughout my career, it was time to put my health first. Thank you to everyone who has taken the time to message, I’m doing everything to try and come back once again.

‘But until then, I will be Chelsea and the Lionesses biggest fan with you all.’