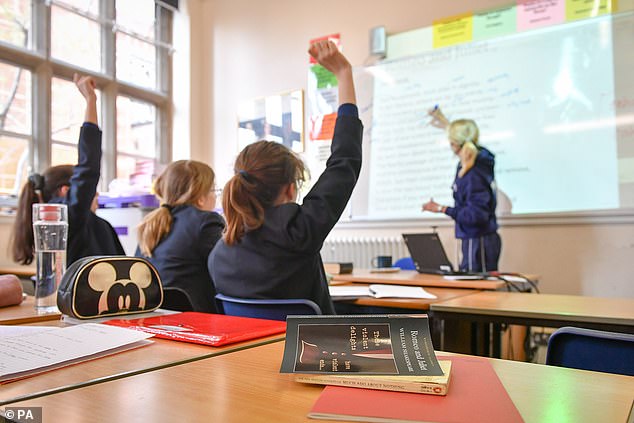 The former Children’s Commissioner for England has backed calls to expand free school meals – but warned political parties must tackle the ‘root cause’ of poverty.

It emerged today that teaching unions have written to the Chancellor and Education Secretary asking for free school meals to be provided to all children from families receiving Universal Credit in England.

Unions and organisations claiming to represent one million school staff asked for an ‘urgent’ expansion of the scheme amid the cost-of-living crisis.

The letter said vulnerable children who do not receive free meals are facing a ‘real barrier to learning’.

Now, Anne Longfield, the former Children’s Commissioner, has backed the call, but insisted politicians must also tackle the causes of poverty.

She said: ‘We keep brushing aside the fact that we have four million children in this country who are living in poverty.

‘Free school meals alleviate that poverty but they don’t get to the root causes of it and that’s something all political parties need to tackle in their next manifesto as we head to a general election.’

It comes after teachers previously revealed some of the worst lunch boxes they had seen in school.

A Mumsnet thread saw teachers outline some of the lunches pupils were given, from Red Bull and Tic Tacs to a cold McDonald’s meal and a dry Pot Noodle.

Anne Longfield, the former Children’s Commissioner, has backed the call, but insisted politicians must also tackle the causes of poverty

Other examples included a packet of biscuits and a bag of Butterkist popcorn.

The letter from teaching unions to Rishi Sunak and Nadhim Zahawi said: ‘Every school day we see the benefits free school meals provide to those currently entitled. For many it is the only hot, nutritious meal they have in a day.

‘A quality school meal helps improve children’s concentration and behaviour during lessons. We witness, first-hand, the effect they can have on improving school attendance, on children’s health, and academic performance.

‘However, the intensifying cost-of-living crisis means many more are now struggling to afford school lunches… We see the devastating reality of children coming to school unable to afford to buy lunch, because their family circumstances means they fall outside the restrictive free school meal eligibility criteria.’

The letter added: ‘Now is the right moment for the Government to commit to an expansion of free school meals, providing a nutritional safety net that supports all children to learn and achieve.’

Reacting today, Ms Longfield told Radio 4’s Today programme: ‘Families are struggling with a huge cost of living increase and so this adds certainty and means that all children get a nutritious meal. They learn and concentrate better and it makes a positive difference to their physical health and their time in school.

‘Ultimately, this is about tackling poverty, something that we haven’t done in this country well enough.

I personally would make free school meals for all primary school aged children. It’s what is planned in Scotland and in Wales too. It takes away the stigma of those children who will be getting free school meals.

‘This is something too that the school leaders are saying but as a first step, there’s a about a million children who are on the edge of benefits and on the edge of poverty who are really struggling with food insecurity and this would be an immediate first step to give them, as they say, the safety net that they need to give them a surety that there’s a nutritious meal inside them each day.

‘More families have become eligible for free school meals but more families are also now experiencing that food insecurity. Schools are on the front line, they see it, which is why this is such an important message from them.

‘I’ve been into schools where there are food banks which is quite shocking at first but now you’ve got parents going into food banks and asking for food that doesn’t have to be cooked because they can’t afford the energy.

‘Food which doesn’t take long to cook, so it doesn’t take away from other costs. So this is very immediate for families. We know this is something children pick up on.

‘The fact that children go home to an empty cupboard is very real for a significant number of children in this country and it’s not something we should rest easy on.

A Government spokesman told the BBC: ‘We recognise that millions of households across the UK are struggling to make their incomes stretch to cover the rising cost of living, which is why, in addition to the over £22 billion announced previously, we are providing over £15 billion in further support, targeted particularly on those with the greatest need.

‘The holiday activities and food programme runs during major school holidays, and wider welfare support is available through the household support fund, which helps vulnerable families in need with essentials, such as food and utility bills.’