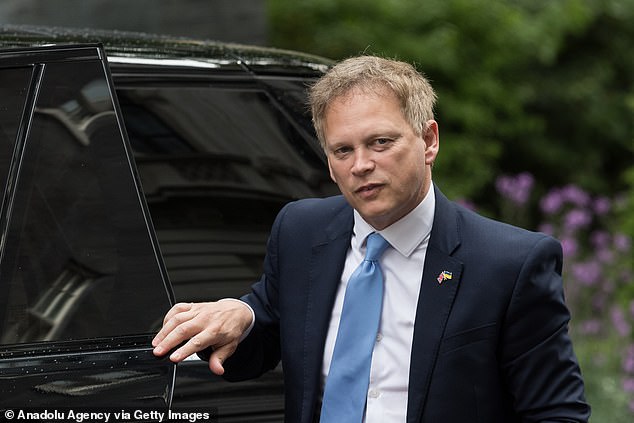 This has got to stop NOW: Grant Shapps warns tour giants not to over-book flights amid fears the airports fiasco could drag on into the summer

By David Churchill For The Daily Mail

Grant Shapps last night warned tourism firms not to over-book flights and holidays amid fears travel chaos will drag on into summer.

The Transport Secretary said scenes over recent days of travellers being reduced to tears after dozens of flight cancellations and delays of up to seven hours ‘must not happen again’.

He accused operators of ‘seriously over-selling’ trips which they could not deliver due to a staff shortage crisis.

Airlines fear disruption at UK and European airports will continue for months as passenger numbers further ramp up post-pandemic.

According to an internal briefing document, Airlines for Europe – the continent’s largest airline association – expects disruption to drag on ‘for a good chunk of the summer season’.

Experts say it will only be averted if operators offer higher wages and ministers further speed-up the background checks new staff must go through.

‘We’ve been clear that industry leaders need to tackle the issues we saw at Easter head-on.

‘Although some steps have been taken, we are still not seeing the progress we need to.’

He added: ‘We will be meeting with airports, airlines and ground handlers again to find out what’s gone wrong and how they are planning to end the current run of cancellations and delays.

‘I also want to be reassured on their plans for the upcoming summer holidays.

‘We need to make sure there is no repeat of the scenes witnessed over the last few days.’

He said the Government had ‘done its part’ by making law changes which allow background checks on new recruits to happen quicker and providing £8billion in support during the pandemic.

The peak summer season begins in six weeks next month when school term ends, meaning operators do not have long to rectify the issues.

The intervention could stoke tensions with the industry after a row broke out with ministers over who was to blame.

Lord Parkinson, the arts minister, said yesterday that the Government had ‘for many months’ been urging the industry to ensure it has enough staff.

MPs also urged the sector to ‘get a grip now’ and called for an investigation into the accusations.

The Transport Secretary said scenes over recent days of travellers being reduced to tears after dozens of flight cancellations and delays of up to seven hours ‘must not happen again’, as fears mount over the impact on people’s summer holiday plans. Pictured: Passengers queue at Heathrow amid the ongoing airport fiasco

Mr Shapps said he would be meeting with airports, airlines and ground handlers to ‘find out what’s gone wrong’. Pictured: People queue at St Pancras International for the Eurostar

Julian Knight, Tory chairman of the Commons digital, culture, media and sport committee, told the Evening Standard: ‘[The aviation sector] risk harming their industry’s reputation for years to come as well as destroying the holiday plans of thousands of Britons.’

But one airport source hit back, saying: ‘It’s disappointing ministers are now looking to point fingers. Throughout the pandemic, industry warned we needed enough notice of restrictions being lifted to ramp staff back up.’

It came as TUI yesterday became the latest major operator to axe dozens of flights. The package holiday giant said it was slashing 43 flights a week from Manchester airport between yesterday and the end of June – a quarter of all flights from the hub.

The move plunged the summer holiday dreams of 37,000 travellers into chaos. British Airways also said it is cutting 16,000 flights, or 8,000 round trips, over the season.