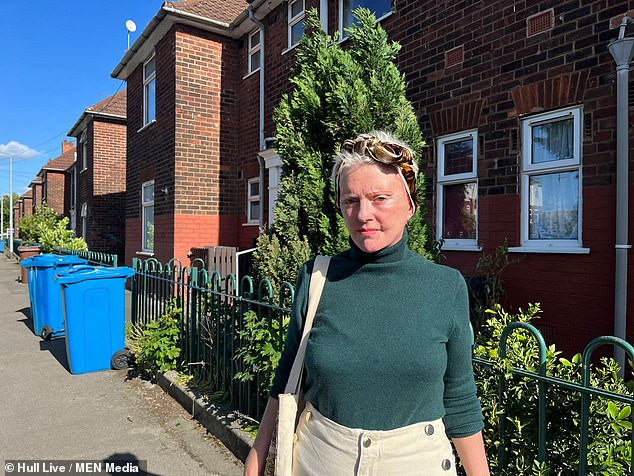 Terrified residents in Hull say they are living in fear of a knife-wielding gang roaming their neighbourhood slashing car tyres, banging on homes and even smashing a window.

Since December, people living in New George Street have repeatedly had their cars vandalised by a group of young men, aged about 18.

They estimate that 37 cars have been targeted so far, resulting in thousands of pounds worth of damage.

Despite the police being informed, the perpetrators have returned numerous times, residents claim.

Some have struggled to go about their everyday lives taking their children to school or going to work without their cars in working order.

Molly Bell (above) is a resident of New George Street in Hull, where locals say they have been targeted by a gang of knife-wielding young men, who have repeatedly slashed car tyres. After having her car vandalised multiple times, Molly says she is is now too afraid to leave it in the street she lives in.

Other residents admitted they were now too scared to park their vehicles outside their own homes.

While they say the saga has been going on for months, the recent batch of slashings started on May 19 in the early hours of the morning.

Tenants on the street spotted three young men popping tyres around 2am, according to MEN Media.

Sallah, a taxi driver who lives on the street, said: ‘I saw them down on the pavement with a knife popping tyres.

‘I then looked down the street and saw that nearly all of the cars on the street had flat tyres.

‘I chased after them to Jubilee Square, while others called the police, but they were armed.

‘The police didn’t arrive for another 40 minutes, even though we told them that they had weapons.’

Residents hoped that their CCTV footage would be enough to catch the youths, but the gang returned again the following night to wreak more havoc.

The gang is accused of terrorising the neighbourhhood for months, including kicking over bins, banging on homes, stealing a bike and smashing a window. The suspects (above) can be seen fleeing the scene on May 25.

Another resident, Molly Bell, described how the young men had tormented them in other ways – banging on windows and doors in the street, knocking over bins and screaming: ‘Come on, do something!’

She added that the recent events had made the street ‘dangerous’ and that she feared for her vulnerable neighbors, many of whom are children or disabled people.

She said: ‘I first had my tyres slashed in December last year and I thought it was personal, because other cars hadn’t been vandalised at that point.

‘I had them replaced and the same thing happened in February, then more recently I’ve had two tyres popped in May.

‘It got to the point where I was too scared to park my car outside my house, so would take it to my family member’s house in Willerby.

‘I’ve had to walk home with all my shopping, because I can’t drive in fear of having to pay to have my tyres replaced yet again. That’s not the only thing those boys have been up to either.

‘I was woken up to the sound of shouting and banging on windows and doors.

‘Early in the morning, the young men had returned but this time they were knocking over all the bins in the street so that rubbish was strewn everywhere.

‘They were screaming ‘come on do something!’ whilst they were doing it, so I would say they are very confrontational and scary people.

‘There’s lots of kids and disabled people on this street and it’s usually very quiet and nice area, but it’s so dangerous now.’

Another resident, who did not wish to be named, detailed more of the gang’s antics, which include stealing a bike off someone’s balcony and smashing a flat window.

She expressed her anger at how the situation has been dealt with and presented her call history to show how many phone calls she has made to police.

The resident said: ‘We have the names and addresses of the boys who we think did it, which we have handed to police, but still no arrests have been made.

‘The police have told us to not put ourselves in harm’s way but encourage us to film the suspects where we can.

‘The young men have been up on someone’s balcony stealing a bike, they’ve smashed a flat window, they have hammered nails into my neighbour’s tyres – how much longer until they’re in our houses?

‘Sallah has chased after them and put himself at risk, but he thinks it’s the only way of catching them and putting a stop to all of this.

Residents of New George Street have issued a plea for the gang to cease their reign of terror.  Victoria (above) has children who play on the street and she says she fears for them.

‘You can bet that Sallah would be the one to get in trouble as well for going after them.

‘How can the police just expect residents to sit back and let this happen? I couldn’t go to work or drop my kids off at school because of the flat tyres on my car and a neighbour had to offer to give us lifts.

‘There are also taxi drivers down this street who make a living from using their cars who are losing business.

‘Thousands of pounds are having to be paid from our own pockets and they just keep returning.

‘We’ve begged for a police car to be parked on the street overnight for a bit of protection but it hasn’t happened – we just can’t take it anymore.’

The residents have now joined forces to issue a desperate plea for those responsible to end their reign of terror.

They said they love the area and are fond of their neighbours and community, but are now fearful of being victimised.

The Tyre Shop, a business located around the corner from New George Street, confirmed that they had had at least seven or eight residents come into the shop for tyre repairs.

Residents have asked police to station a car in the street overnight to prevent further damage, but local Neighbourhood Inspector Caroline Andrews said they are considering the May 19 slashings as an ‘isolated incident’.

On police advice, they gave receipts to the customers to keep track of how many people have been affected.

A Humberside Police spokesman said: ‘Investigations are underway following reports that a number of tyres were damaged on vehicles down New George Street in Hull early on the morning of Thursday, May 19.

‘It was reported that three men travelled down the street damaging tyres with a knife.

‘They were challenged by a car owner and reportedly fled the area. Officers were deployed and carried out a full and thorough search of the area however the suspects were not located.’

Local Neighbourhood Inspector Caroline Andrews said they are considering the May 19 slashings as an ‘isolated incident’.

She said: ‘Firstly it is important to say that we believe this to be an isolated incident with no specific target.

‘We have carried out a number of investigations since the incident, including speaking to witnesses and reviewing CCTV from the area, and these enquiries are continuing.

‘As part of this, we have officers in the area and I would encourage anyone with any concerns to stop and speak to them.’

Police urge anyone with information about the incident or those responsible to get in touch, either by calling the non-emergency 101 line quoting log 44 of 19 May or anonymously via the independent charity Crimestoppers on 0800 555 111.