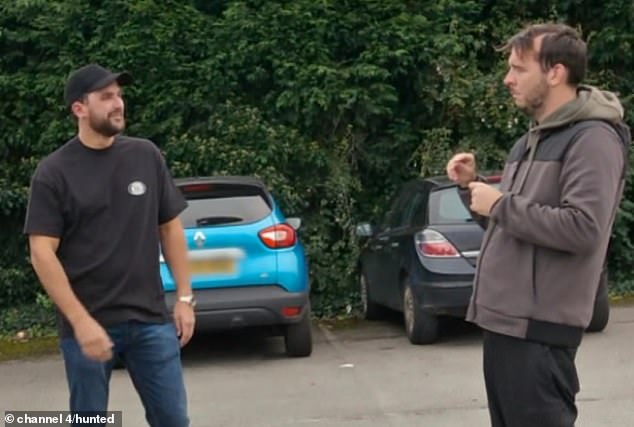 Viewers of Channel 4’s Hunted branded the show ‘unrealistic’ and ‘scripted’ last night after officers claimed to track down the location of a pair of contestants over an Instagram login.

The gameshow sees volunteers act as fugitives, who must avoid CCTV, ATMs and phone calls in a bid to remain untraced for 25 days.

Turning their backs on their home comforts to go on the run without being caught, they are each given a bank card with access to £100 and a cameraman who discreetly follows their every move.

But the rules of the game are simple – stay hidden for as long as possible, while being hunted by a team of ex-military, police and CIA agents, experts in the art of surveillance and capture, in a bid to win a share of £100,000.

In last night’s episode, Nathan and James, from Castleford, met up with a close friend Ross in a pub car park, who then showed them a video posted by the Hunters on James’ Instagram page.

Meanwhile at HQ, the Hunters claimed they were tracking Ross’ phone, and they could deduce from the activity that Ross was with the boys, before pinpointing their exact location.

But many of those watching were left unconvinced by the scenes, with one writing: ‘This series is the biggest load of tosh you’ve ever produced. Completely unbelievable, massively unrealistic leads.

Viewers of Channel 4’s Hunted branded the show ‘unrealistic’ and ‘scripted’ last night after officers claimed to track down the location of Nathan and James, from Castleford after their friend logged onto Instagram

At the start of the programme, housemates Nathan and James had been on the run for nearly two weeks and had had to rely on friends worn out camping equipment.

The duo were shown camping out in a wood, with Nathan saying: ‘One thing I can’t wait, when I get home, is you can have your own comfortable bed.’

After a friend logged onto Instagram to show Nathan and James a video, the Hunters at HQ claimed that allowed them to pinpoint where the duo were

Their time on the run was taking its toll and they decided to go back to their home of Doncaster to pick up camping equipment which they had stashed with a friend.

The men used public transport to travel 40 miles to rendezvous with their friend Erin.

Nathan said he wanted to write a letter for Erin to give to their friend Ross, asking him to meet them with their new camping  gear.

James said: ‘Ross is a good friend so we can trust him.’

In the letter, the two suggested to Ross they meet on Wednesday in the Cherry Tree pub.

Nathan and James decided to lay low in the woods until then, but struggled with missing their family and friends.

Nathan explained: ‘I think [James] is feeling fed up and wants to go back home.’

And James said he was missing home, admitting: ‘I miss my dog. It’s really, really hard.’

The boys were hoping their friend Ross received their letter and began making their way to the prearranged meeting point.

During the show, James confessed he was struggling with being away from home and missing his dog Roxy

However with no indication of the boys whereabouts, cyber analyst Sophia was shown hacking into James’ Instagram account.

Thinking she had identified a possible weakness, she said: ‘A lot of his messages to his friends are about his dog Roxy and how much he hates to leave her and how much he will miss her.’

The team said they planned to dress the dog up in a ‘Team Hunter’ onesie in order to exploit James’ love for her.

Having visited James’ home, they filmed Roxy in the outfit before posting it to his social media account.

The team at HQ visited James’ home, where they filmed Roxy where a ‘Team Hunter’ onesie, which they later posted to his Instagram

Meanwhile, the boys were overjoyed to see their friend Ross arrive at the pub, before he explained about the Instagram post.

They asked if they could have a look at the post, with James saying: ‘They are w**** using my Instagram.’

Back at HQ, one of the analysts explained how they had been monitoring James and Nathans social media accounts – but also claimed to have been tracking activity on Ross’ phone.

The unnamed analyst said: ‘Ross, who is a known associate of theirs, has logged into Instagram. There is every chance is that James, Nathan and Ross are together looking on the Instagram.

The duo were left cackling after meeting up with a friend, who showed them the clip of the dog on James’ Instagram account

‘We’ve put the triangulation on the map.’

From there, the Hunters claimed they were able to identify the few buildings in the area, and from that, deduced the team had to be at the Cherry Tree pub.

But the hunters were unable to catch Nathan and James, who escaped on foot before hitching a ride on a coach further north.

Many of those watching were left unconvinced by the scenes, with one person writing: ‘”This man logged in to view his Instagram so instantly we know that he has viewed it with people we are hunting…”

‘What? I’ve seen smaller leaps at the Olympic long jump.’

Another wrote: ‘What’s that? Someone James knows looked at a video on his Instagram post? Obviously they must be together right?

‘This season is really starting to annoy me now.’

A third commented: ‘I enjoy watching Hunted however this show is so rigged. From one guy logging on to Instagram to see his mates posts, they deduced the two runaways are with him. So rigged.’