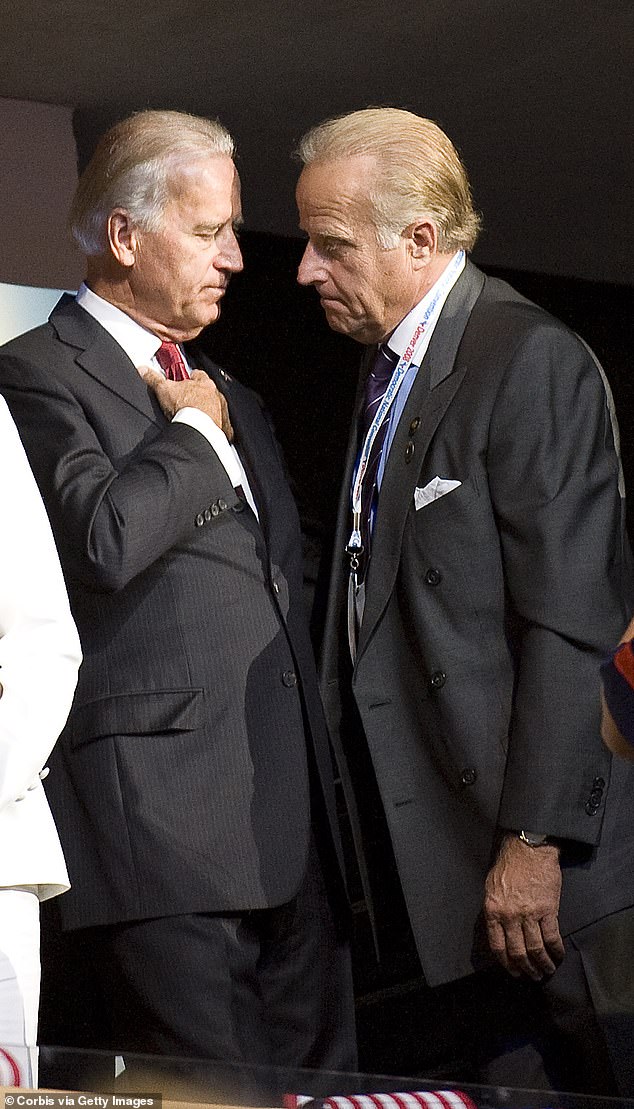 James Biden dismissed the idea that he acted as a ‘fixer’ during his brother Joe Biden’s political career but instead used a rare interview to say that he had always tried to help his family as much as possible.

Republican lawmakers have signaled that they want to probe the business affairs of the president’s younger brother.

And emails from Hunter Biden’s laptop reveal further detail of how he was involved with his nephew in a lucrative deal with Chinese executives in 2017.

The result has been a string of reports that James – known as ‘Jim’ or ‘Jimmy’ inside the Biden family – has tried to cash in on the family name, and at times acted as a ‘fixer’ to get things done for relatives.

But in a telephone interview he said he was simply a responsible family member looking out for other Bidens.

‘I’m the guy who assists in everything,’ he told the Washington Post.

‘When it comes to my family I try to be as supportive as I can.

‘But this notion of “the fixer,” or any reference that has a negative connotation, is offensive.’

James Biden (right) with his elder brother at the Democratic National Convention in Denver in 2008. The younger Biden is known as a ‘fixer’ for his family – but in a rare telephone interview he said the word was ‘offensive’ and that he simply to be as supportive as possible

James Biden was finance chairman of his brother’s first Senate campaign in 1972 and then struck out as a serial entrepreneur. He has been accused of cashing in on the family name

James Biden is seven years younger than the president.

He was finance chairman of Joe’s first Senate campaign in 1972 before launching a career as an entrepreneur.

In the 2000s he entered the hedge fund world with his nephew Hunter.

Throughout the telephone interview he suggested he should not be talking to a reporter, but pressed on to push back on criticism from Republicans and the media.

‘The notion I am some underworld figure and I am a fixer or the cleaner or I’m this or that — I’m a very concerned family member who tries to protect my family in every way I can, in what is a very ethical way,’ he said.

His brother has described what that support looks like, using the time his son moved into a new apartment as a law student

‘My brother Jimmy, who fixes everything — my brother Jimmy was with us, and we went down and bought about 28 gallons of paint,’ he said during a visit to Connecticut last year.

The newly revealed emails will also give fresh ammunition to opponents investigating whether the Bidens tried to use their famous relative’s foreign policy experience to make money in deals with Chinese companies.

In one, James Biden offers reassurance to his troubled nephew. Not only were they in the middle of a deal, but Hunter was struggling with addiction and a relationship with his late brother’s s widow had become public knowledge.

‘Hunter, we are cut from the same cloth,’ James Biden wrote in a error-strewn email, according to the Washington Post which said it had authenticated the message.

‘… You are a fine and yes, a gentle person. Believe it or not, I know you.

‘Sounds corney, but we both deserve to enjoy the moment. Concentrate on the good in our lives and try to step out of all the bull*** you deal with on a minute to minute basis.’

Days later, James Biden sent another message urging his nephew to take advantage of an opportunity.

‘Just got off the phone with your father…We have the two biggest days of our business life in front of us!!!!!!

‘We must be smart, or everything goes up in smoke! Please call me.

‘You MUST remain calm. Timing could not be worse. Calm and measured!!!!

The pair signed a deal with officials from the Chinese energy group CEFC – an agreement that has drawn tight scrutiny from President Biden’s political enemies.

Entities controlled by uncle and nephew were paid $4.8 million even though projects they raised with CEFC never came to fruition.

Republican Sen Chuck Grassley recently wrote to the Justice Department asking it to investigate whether Hunter and James Biden should have registered as foreign agents for their business arrangements in China.

Sen. Chuck Grassley, the ranking Republican on the Judiciary Committee, has been looking into the Biden’s financial transactions for the past three years. He is pictured revealing receipts that claim Hunter had business dealings with a Chinese consulting  firm

‘Hunter Biden wasn’t the only Biden family member who had connections to the communist regime,’ Grassley said in a Senate floor speech. ‘James Biden did as well.’

Last month he revealed how James Biden received $65,000 a month from the Chinese-linked consulting group throughout 2018, totaling $780,000. The cash was given to his Lion Hall Group.

The laptop also showed the tight bond between uncle and nephew.

As well as the business messages, James Biden encouraged Hunter to take time to relax.

And James would often be the only one who could reach Hunter when he was in the depths of despair and addiction.

‘Yeah. He is literally there for everyone. He’s my, he’s my best friend in the world, my Uncle Jim. I mean, he’s an incredible human being in his own right.’