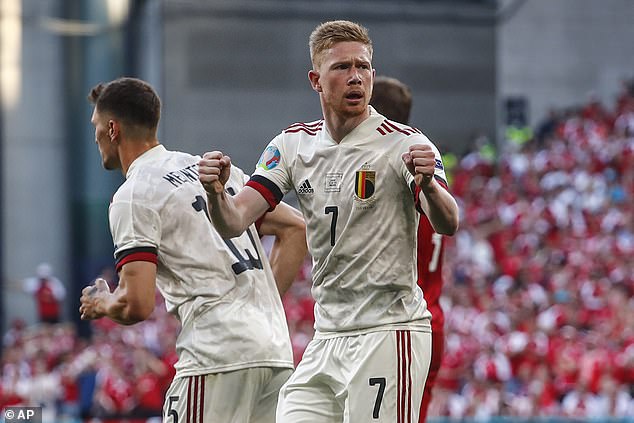 Is there anything you can’t do, Kevin?! Manchester City star De Bruyne passes his UEFA A coaching licence after working for badge with Belgium as midfield ace gets prepared for life after playing

Kevin De Bruyne has been awarded his coaching diploma after passing his UEFA A licence.

The Belgian FA embarked on a unique project in 2019 when they announced that 19 players, including De Bruyne, would be doing their UEFA A and B licences while on international duty.

De Bruyne, it was reported on Tuesday, is one of 10 players to have completed the courses and as such has been awarded his A licence.

It emerged this season that De Bruyne was undertaking sessions for youth sides in the Manchester City academy, up to the U16s. That appears to have all contributed to De Bruyne being awarded the second highest coaching badge, after the UEFA Pro licence.

Earlier this season De Bruyne told Belgian newspaper HLN how he had found it coaching some of City’s next crop of superstars.

‘It’s crazy,’ he said. ‘It sometimes takes hours to prepare one training session.’

The Belgian did however say in April that he was ‘not sure’ about a move into coaching immediately after his playing days.

The City midfielder was not the only Belgian player to have been awarded his badges on Tuesday, however, with nine of De Bruyne’s international team-mates also completing the pioneering scheme that 19 players initially signed up for.

In 2019, Kris Van Der Haegan, Director of Coach Education for the Royal Belgian Football Association told the Training Ground Guru how the scheme to train up Belgium’s ‘Golden Generation’ to be coaches came about.

‘Roberto put the idea on the table after the World Cup. He said, “how can we involve these players in the future of Belgian football?”‘ he said.

Usually players have to have retired to take on the badges, but Belgium applied for special dispensation from UEFA and as such now can almost field an entire international XI of fully-qualified A licence-holding coaches.

The only stipulation was the players reportedly had to have had either 50 caps or been a part of Belgium’s squad for the 2018 World Cup qualifying campaign.

Whether or not managers want a changing room full of qualified coaches is up for debate, but Van Der Haegan said that the scheme itself would help Belgian football be more successful on the pitch.

He said: ‘Now they will be looking at clips of the opposition and taking an active part in the team’s preparation.

‘When the players are covering opposition analysis as part of the course, they will be using real examples about the team’s next opponent.

‘When they do analysis of the Belgium team, they will be working on the reality of games. They will be more involved in the preparation and begin the really think like coaches.’