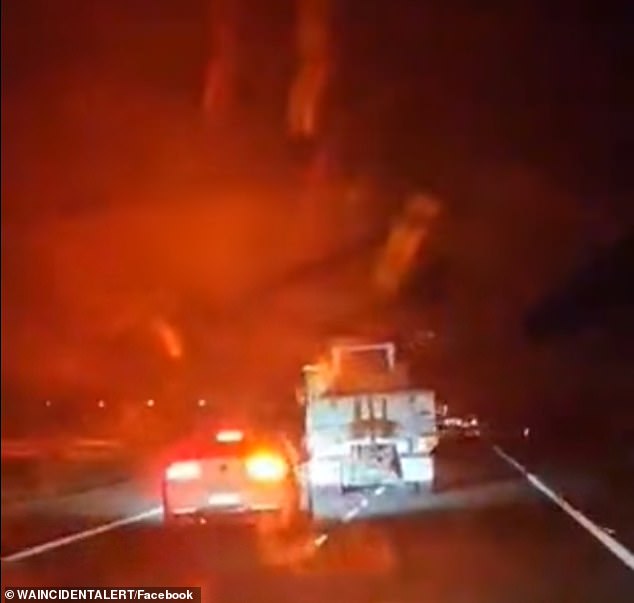 Police have appealed for any information after a shocked motorist captured video of a truck recklessly swerving across the lanes of a freeway to block a car from overtaking it.

The dashcam footage was taken in the early morning darkness at around 6:15am Tuesday on the Kwinana Freeway heading towards the city from Perth’s south.

The footage shows a car close behind a heavy white truck which is already veering unsteadily across the dividing freeway’s dividing line.

‘What the hell?’ shouts a woman’s voice inside the car filming the incident.

The truck then fully drifts across to the right lane apparently only a few metres in front of the car trailing it.

When the car indicates and tries to overtake on the left the truck swerves back to block it.

When the car then tries to dart past on the right the truck swerves back that way to stay solidly in front of the car.

The car is forced to rapidly brake.

The video was submitted anonymously to the WA Incident Alerts Facebook page.

One commentator said that the same stretch of road had seen a similar accident on Saturday morning with one person put into hospital and three vehicles involved, two written off.

The bulk of commentators condemned the truck driver’s action, although this was not unanimous.

‘Hope he gets fined big time, what an idiot,’ wrote another person.

However, one poster took a different point of view.

‘Car indicating to go round truck driver should lose licence hope all ok and no children in car. Grow up people,’ she wrote.

Another person suspected the incident was provoked.

‘What did the car do to the truck before this?’ she wrote.

WA Police said the incident had not been reported.

‘Police encourage anyone in that situation on WA roads to report the matter to police immediately on 131 444 and provide a description of the other vehicle involved, including the registration if possible,’ a spokesperson said.

‘In this instance we would like to hear from the occupants of both vehicles being driven behind the truck in case they have information that could assist with an investigation.’

In 2019 Infrastructure Australia rated Kwinana Freeway among the 10 worst roads in the country for delays.