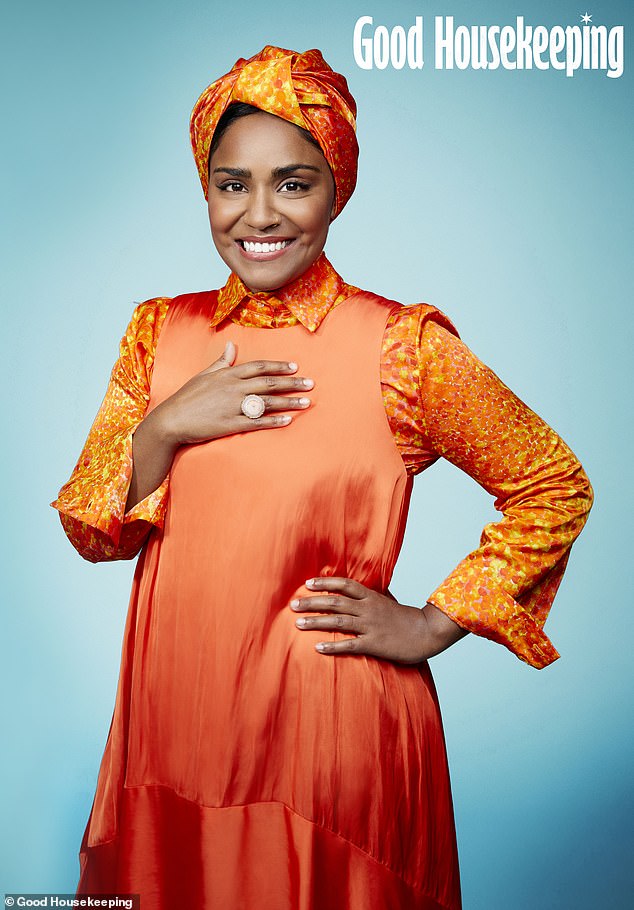 Nadiya Hussein has revealed how growing up in an environment where men were considered the biggest earners has impacted her own parenting.

The mother-of-three, who has two teen boys, Musa, 15, and Dawud, 14, and a daughter, Maryam, 11, told Good Housekeeping she is ‘drumming financial independence’ into her daughter.

Speaking in the latest issue of the magazine, the Great British Bake Off winner, 37, also admitted she was criticised for taking on presenting and writing jobs.

And while she used to struggled with feeling like there was no space for her, the TV personality added she now is ‘owning’ her career.

The mother-of-three, who has two teen boys, Musa, 15, and Dawud, 14, and a daughter, Maryam, 11, told Good Housekeeping she was ‘drumming financial independence; into her daughter

‘When I was growing up, men were revered,’ the baker explained.

However, Nadiya said that she’s relieved things have now changed for her as a mother.

‘I’m not raising my boys to be stronger than my girl; they are equals. The one difference is that I drum into my daughter the importance of financial independence,’ she said.

The baker admitted struggling with her own demons in the past, especially as she explored presenting and writing jobs.

‘I was known as a baker, so it was really nerve-racking,’ she admitted, adding she feels she is ‘much more than just a baker.’

‘I think it is really important, especially as women, to show that we are multifaceted, and to not be afraid of taking that leap into an environment that you don’t think you fit into,’ she said.

‘I jumped into a world that I thought had no space for me – and now I own it,’ she added.

However, the mother-of-three also spoke of fans expectations and the pressure that comes with being a role model for so many.

‘I’m not going to say I take it in my stride and it’s really easy, because it’s tough and it weighs heavy,’ she admitted.

‘Everybody wants to see the perfect version of you within every community, and I’m definitely not perfect,’ she added.

But Nadiya added she’s found ways to deal with the stress, including writing poetry daily.

The presenter revealed she is raising her daughter Maryam, 11, tat she can be as successful as a man

‘I’ve been doing it for a few years and I find it really mindful and a way of expressing my feelings,’ she explained.

‘I’m a firm believer that you have to find inspiration in the everyday, the extraordinary in the ordinary and the magic in monotony. I’m looking for it all the time,’ she added.

When it comes to family life, Nadiya, who has been married to her husband Adbal for 16 years, said she would ‘love’ to adopt a child but has to take her own children into consideration.

Nadiya with her three children, Musa, 15, and Dawud, 14 and Maryam. She said she is teaching them about parity and equality

The baker announced in 2020 that her husband and her were thinking of expanding their family through adoption.

‘I have the space for one more person, but there’s so much more to consider now that my kids are older and more opinionated,’ she said.

‘We’d have to sit down with them and discuss it as a family,’ she added.

However, the mother-of-three has not turned her back on the idea, saying:  ‘Our lives have changed a lot since we first thought about adopting, but if someone said, “Here you go, you can look after this child for the rest of your life,” I’d do it in a heartbeat.’

When it comes to family life, Nadiya, who has been married to her husband Adbal for 16 years, said she would ‘love’ to adopt a child but has to take her grown children into consideration