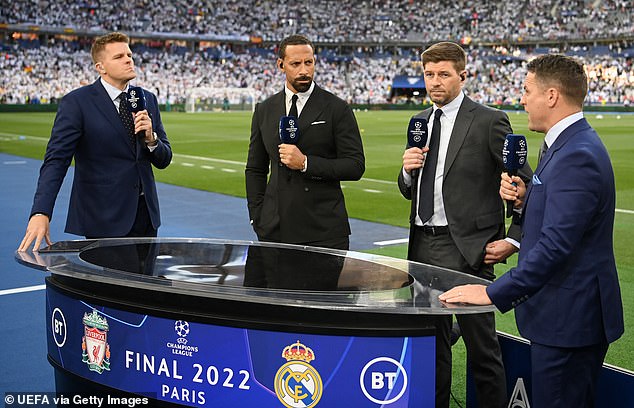 Richard Keys has hit back at Gary Neville after the Sky Sports pundit slated BT Sport for their lack of coverage of the crowd trouble that tarnished Saturday’s Champions League final.

Kick-off between Real Madrid and Liverpool was delayed for over half an hour due to crowd congestion and safety concerns around the Stade de France, while BT relied on extensive punditry and analysis to fill the time rather than assess the situation around the stadium.

Responding to a tweet questioning why BT weren’t giving more information about the unfolding chaos, Neville replied on the night itself: ‘Are you surprised? I’m not. They can’t react or aren’t agile to things like this happening.’

It prompted Keys, himself a former Sky Sports presenter who now works for beIN SPORTS, to stick up for his colleagues at BT.

Keys wrote on Monday: ‘F*** me @GNev2, Is there nothing you’re not an expert on? I’ve worked with guys @BTSport & they’re top pros as @mrjakehumphrey has said.

‘I’m quite certain Saturday was a challenging night for everyone. Just like covering the OT (Old Trafford) riot you instigated & covered badly at Sky.’

Numerous fans were trapped outside the Stade de France stadium despite having valid tickets, while French police have been accused of heavy handed tactics

Keys was referring to the game between United and Liverpool that was called off in May 2021 after United fans broke into the stadium to protest against the Glazer family’s ownership amid plans to create a Super League. Neville was one of the most vociferous critics of the plan and of the United owners.

BT presenter Humphrey, who hosted their coverage alongside pundits Rio Ferdinand, Steven Gerrard and Michael Owen, thanked Liverpool fans for looking after his parents who were caught up in the congestion outside the stadium.

‘Just a word of thanks to the people who helped my Mum and Dad at the game last night,’ he wrote on Twitter.

‘Both in their 70’s, both worries for their safety, and in my Mum’s words “all these wonderful young Liverpool supporters really looked after this old lady”. I’m hugely grateful.’

And taking to LinkedIN, Humphrey moved to expand on BT’s coverage on the night.

‘Possibly one of the hardest sports events I’ve ever covered. And I’ve done some tricky ones,’ he said.

‘We had limited information about what was going on outside, my talkback (the umbilical cord to my production team) suddenly stopped working, the TV compound was impacted by the tear gas so our production team were barricaded in their trucks.

UEFA have promised to compensate 2,700 ticket-holders who were deprived of the chance to watch Saturday’s Champions League final in Paris.

The start of the match was delayed by 36 minutes as chaos reigned at the turnstiles with many Liverpool fans prevented from entering the stadium.

Some of those supporters were also pepper-sprayed and tear-gassed by French riot police.

Many were eventually able to access the ground after the match had started but others missed the game entirely.

‘We have asked UEFA, who have agreed with us, that these people be precisely identified and receive immediate compensation,’ said French sports minister Amelie Oudea-Castera.

‘And many of us had friends and family at the game and we had no idea if they were even safe.

‘And amongst all that we were trying our best to get the tone right, under the scrutiny that seems exclusive to live football.

‘Hopefully you wouldn’t have known too much about all that, the BT Sport production team are up there with the very best I have ever worked with.’

UEFA announced on Monday night that an independent investigation will be held into the chaos at the Stade de France.

It came as Liverpool reacted with fury after the French government’s latest attempt to blame their supporters for the trouble.

Liverpool chairman Tom Werner has written to Amelie Oudea-Castera, France’s sports minister, demanding an apology for her claim that 30,000 to 40,000 people ‘without tickets or with fake tickets’ had been at the Stade de France.

Liverpool chief executive Billy Hogan gave an impassioned interview about an occasion that had become the ‘worst experience in many people’s lives’.

Hogan added on the club’s website: ‘We are also reviewing legal avenues available to us on behalf of affected supporters.’

The situation intensified on Monday following a remarkable assault from French politicians that included one pointing the finger at Jurgen Klopp for the controversy, after the Liverpool manager encouraged fans to travel to Paris with or without tickets.

French Sports Minister Amelie Oudea-Castera (above) said that 30,000 to 40,000 people ‘without tickets or with fake tickets’ had been at the Stade de France

Liverpool chairman Tom Werner (right), pictured inside the Stade de France on the night, has written to Oudea-Castera demanding an apology for her claim

Gerald Darmanin, the French interior minister, made a string of wild claims since Saturday designed to frame Liverpool fans as being badly behaved and solely responsible for a situation that has now become an international political incident.

Prime Minister Boris Johnson’s spokesman said he was ‘deeply upset and concerned’ by footage of women and children, among others, being sprayed with tear gas and was ‘hugely disappointed’ about how they had been treated by the French police.

Hogan was so incensed about Darmanin’s provocative comments that he issued a second statement within 24 hours.

On Sunday, he had said the chaos was ‘unacceptable’ and ‘put people at risk’ but he went further on Monday night and could not hide his dismay at the ordeal to which thousands of travelling fans had been subjected.

‘At this stage it’s just not responsible (for the French authorities) to be making comments before we’ve gathered all the information,’ said Hogan.

Fans, including young women and children, were sprayed with tear gas by French police (right)

There were crowds and queues outside the ground, with a sizeable bottleneck of supporters

‘People have obviously had their experience on the ground at the stadium, but until the relevant stakeholders have had the opportunity to go through a proper investigation, I don’t think it’s appropriate to be making any comments on any numbers.

‘Forty-thousand people was the number I heard that were at the stadium without tickets. Somebody said that today — how can that be quantified at this stage, before we’ve had an independent and transparent investigation?

‘There’s also been quotes about people with fake tickets but, again, how do we know all the facts until we’ve had an investigation? One fact we do know is the Champions League final should be one of the finest spectacles in football and it resulted in one of the worst experiences of many supporters’ lives.

‘I would say that all politicians and agencies involved in this event need to wait until a full and independent investigation is concluded before attempting to shift blame.’

Real Madrid won the match 1-0, with Vinicius netting the decisive strike in the second half.