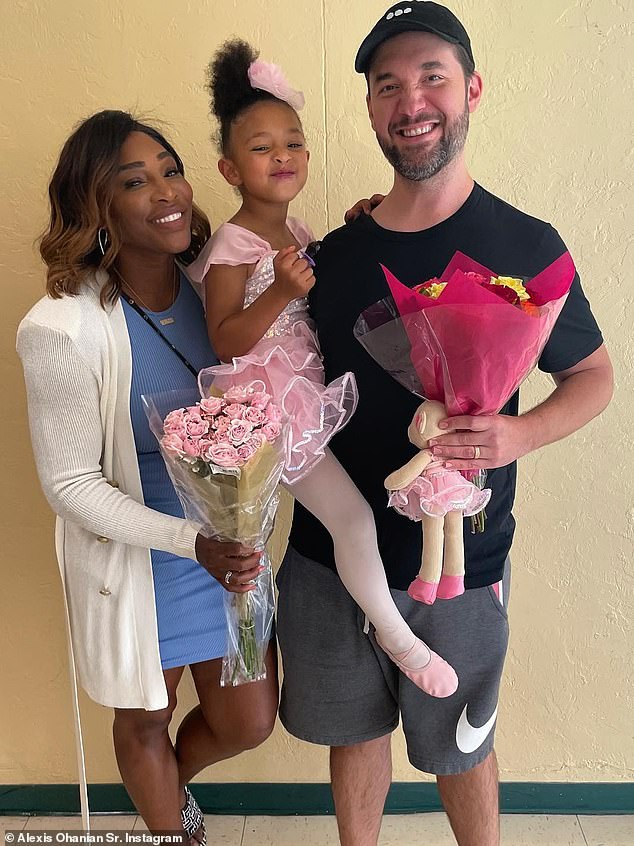 Serena Williams and her husband Alexis Ohanian glow with pride as they attend the first ballet recital for their daughter Olympia, four

Serena Williams and Alexis Ohanian glowed with pride as their daughter Olympia, four, reached a new milestone on Monday.

Alexis, who co-founded Reddit, posted a heartwarming family photo to Instagram and gushed: ‘First ballet recital for @olympiaohanian in the books.’

The sweet snap showed Alexis beaming as Serena cradled their little girl, who was still wearing her tutu from her big performance.

‘Proud of you, Junior!’: Serena Williams and Alexis Ohanian glowed with pride as their daughter Olympia, four, reached a new milestone Monday

Olympia’s parents apparently showered her with praise after the recital, as both of them were carrying bouquets in her honor.

The little tyke, whose full name is Alexis Olympia Ohanian Jr., was celebrating her latest achievement with a ring pop.

Her father wrote in his Instagram caption that he and Serena were ‘proud of you, Junior! (The ring pop was not part of the performance).’

During a recent interview on the Today show, Serena candidly discussed the way she is able to balance her career as a world-class tennis star with her home life.

Sporty: Serena and Alexis have been introducing their little girl to all sorts of fun recreational activities, including miniature golf

‘I don’t know how moms do it. I work a lot, and I can’t imagine working a full day like most working women and then go back to their babies,’ she said.

‘I’m fortunate enough that I have days off, and I get to make my schedule and then can spend the rest of the day with her. And that’s still hard.’

Serena and Alexis tied the knot at a star-studded New Orleans wedding in November 2017, two months after their daughter was born.

During the coronavirus lockdowns in Serena revealed on Insta Stories that little Olympia has been signed up for tennis lessons herself.

However she was to be instructed by neither her mother nor by her aunt Venus who is also a tennis star, according to Serena’s posts at the time.

In fact Serena shared that the teacher they have chosen at that point had ‘no idea’ that her new pupil is the daughter of a world-famous athlete.

She also said she would leave the lessons immediately after dropping Olympia off so as not to be an ‘overprotective’ or ‘distracting’ influence.

However at the beginning of last year she posted a sweet Instagram snap of herself looking on lovingly as Olympia practiced her tennis moves.

Branching out: Serena is pictured in a recent Instagram snapshot modeling one of the items from her S By Serena fashion line