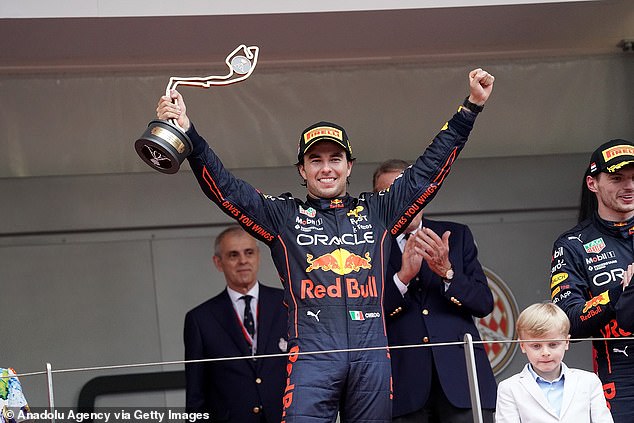 Sergio Perez has signed a two-year contract extension with Red Bull days after his dramatic win at the Monaco Grand Prix.

In wet conditions on the Cote d’Azur Perez stormed from starting third on the grid to claim victory at Monaco, thanks in no small part to a number of mistakes from Ferrari cars.

The 32-year-old Mexican said it had been an ‘incredible week’, starting with his victory on Sunday, his first of the season, and being capped off with the announcement that his deal had been extended by two years.

He said: ‘For me, this has been an incredible week.

‘Winning the Monaco Grand Prix is a dream for any driver and then to follow that with announcing I will continue with the team until 2024 just makes me extremely happy.

‘I am so proud to be a member of this team and I feel completely at home here now.’

Perez joined Red Bull in 2020 and has grown into a talented figure on the team, finding himself third in the Drivers Championship.

Christian Horner, Red Bull’s team principal, said Sergio Perez had become a force to be reckoned with the ‘sharp end’ of the grid

Christian Horner, Red Bull’s team principal, paid tribute to Perez’s development since his arrival at the team two years ago.

‘Time and again he has proved himself to not only be a magnificent team player but, as his level of comfort has grown, he has become a real force to be reckoned with at the sharp end of the grid,’ he said.

‘For us, holding onto his pace, race craft and experience was a no-brainer.’

Meanwhile, the awarding of the new deal to Perez comes amid comments from Max Verstappen’s father, Jos, that Red Bull were ‘favouring’ Perez at the Monaco Grand Prix.

Verstappen went on to complain that Max, the reigning world champion and current drivers, was not helped by the ‘racing strategy’ that he said favoured Verstappen Jr’s. Mexican team-mate.

‘Red Bull achieved a good result, but at the same time exerted little influence to help Max to the front,’ he wrote in a blog post.

He continued: ‘That he finished third, he owes to Ferrari’s mistake at that second stop of Charles Leclerc.

‘That he finished third, he owes to Ferrari’s mistake at that second stop of Charles Leclerc.’

‘The team can perhaps explain that as a gamble, but they had already seen, with for example Gasly, that the intermediates were the best option at the time,’ he went on.

‘I would have liked them to go for Max, but of course I am not entirely objective.

‘I think ten points from Max have been thrown away here. Especially with the two retirements we’ve had, we need every points.

‘Don’t forget that Ferrari currently has a better car, especially in qualifying.’

Despite Verstappen Sr’s. complaints about Red Bull’s racing strategy, Perez highlighted his strong relationship with the his Dutch team-mate as a reason for remaining with the team.

‘We are working very well together and my relationship with Max, on and off the track, is definitely helping drive us forward even more,’ he said.

‘We have built tremendous momentum as a team and this season is showing that. I am excited to see where that can take us all in the future.’

Verstappen current leads the Drivers Championship by nine points from Ferrari’s Charles Leclerc and a further 15 points ahead of Perez.