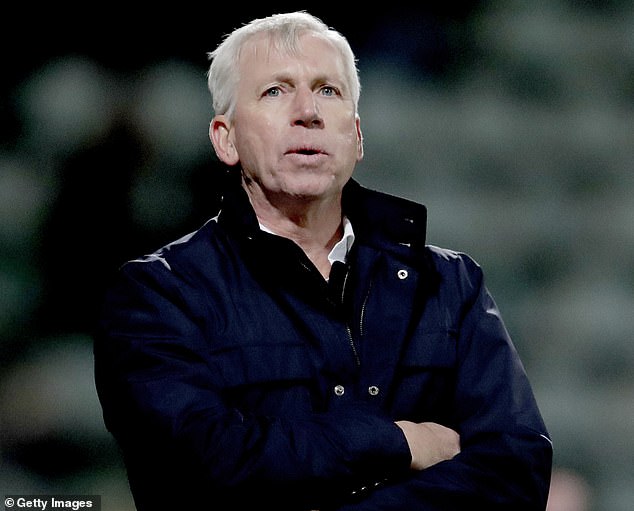 ‘The events before and after the match were not acceptable for me’: Alan Pardew quits as CSKA Sofia boss after the Bulgarian club’s fans targeted their own black players with racist abuse following last month’s cup-final defeat vs rivals Levski

Alan Pardew has resigned as manager and technical director of CSKA Sofia with immediate effect after a section of the Bulgarian club’s supporters targeted their own black players with racist abuse.

Pardew first joined CSKA as a technical director in November 2020, before stepping in as interim manager following the departure of Stoycho Mladenov in April.

Despite suffering defeat against bitter rivals Levski Sofia in last month’s Bulgarian cup final, the former Premier League boss was planning to remain in charge of the side next season.

But one week after the cup-final blow, a small section of CSKA fans targeted the teams black’s contingent with racist abuse as they arrived for one of their final league matches against Botev Plovdiv.

The players in question, who had bananas thrown their way outside the stadium, initially refused to take part in the fixture before later being persuaded to do so.

And in light of the sickening incident Pardew and assistant Alex Dyer, the club’s first ever black coach, have decided to walk away from their positions.

Pardew said in a statement on the club’s website: ‘First, I want to thank all the real CSKA fans for their support and passion for the club. To Grisha and Dani Ganchevi for their efforts to bring the club forward in such challenges and circumstances.

‘It was a privilege for me to be a part of and to serve this club. Unfortunately, my time here is over. The events before and after the match with Botev were not acceptable for me, for my assistant Alex Dyer, or for our players. The reason no one gave an interview after the meeting was that we were all very outraged by the situation that had escalated.

Pardew, who took on the interim job in April after joining as technical director 18 months ago, has stepped down from his positions over the incident

‘Our players decided to play only out of loyalty and to protect the club. The small group of organized racist fans who tried to sabotage this match is not what I want to lead and represent the team. Definitely, this is not the right path for the benefit of CSKA, because such a club deserves much more.’

Dyer, who played alongside Pardew at Crystal Palace and Charlton, had previously admitted his fears over joining his old team-mate in the country, telling Sky Sports earlier this year: ‘When I was invited, I spoke to my wife and family. I had to think because as a black person I can’t just go to another country and not know how I’ll be received. I’m obviously black and I don’t know what to expect.’

England players were subjected to racist abuse when they made the trip to Bulgaria for a Euro 2020 qualifier in October 2019, which earned the hosts a two-match stadium ban and £65,000 fine from UEFA.

During that match, Bulgaria were already serving a partial stadium closure due to racist behaviour.

His assistant Alex Dyer, who had previously held fears about working in Bulgaria, has also left