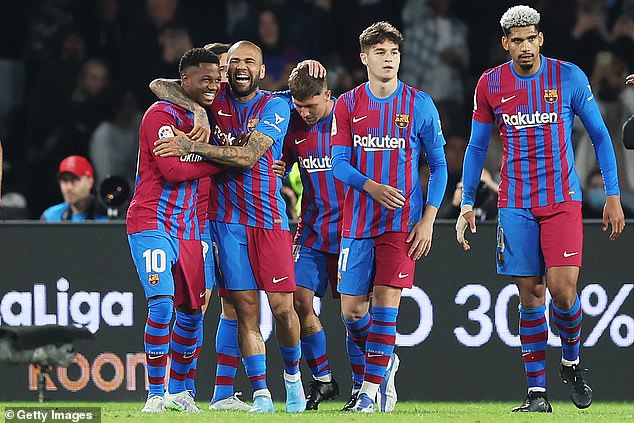 June 16 could mark a new era for Barcelona.

If members vote to allow the sell-off of a chunk of the club’s future TV rights earnings and half of its retail arm, then they will be able to sign Robert Lewandowski and have a better chance of building a competitive team around him.

But will they still need to see Frenkie de Jong to Manchester United? And what do they lose by mortgaging the club’s future in this way?

Sportsmail looks at the dilemma faces those who have to vote yes or no in two week’s time.

Why the need for more financial contortionism? Can the club not just go out and sign Lewandowski?

As things stand the club are not even allowed to register midfielder Sergi Roberto on his cut-price new contract, much less Lewandowski.

They need to bring more money to the club. They need to sell things: TV rights, shirts, and players, whatever they can; hence these two proposals being put to the vote.

The club would like to sign Robert Lewandowski, the Bundesliga’s top scorer, but need to restructure their finances to be able to afford him

So let’s talk proposal one. Instead of selling the club’s replica shirts and keeping all the revenue they want to sell the retail arm making a quick buck at the expense of all the longer-term bucks. Is that it more or less it?

Well it’s not the whole retail arm. It’s 49.9 per cent of ‘Barcelona Licensing and Merchandising’ (BLM). The club would still have majority control over decision making if they wanted it.

Although actually they feel that one of the advantages of the deal is putting experts in charge of making more money from merchandising (it’s not just shirts).

With the club shops having to close through the pandemic and no Leo Messi shirts to sell last season, revenue has fallen.

This is seen as selling half the business but to someone who can make it more profitable in the long-term.

How much and to whom will it be sold?

The figure most often quoted 200m euros [£170m] to a consortium of two merchandising giants: Fanatics and Investindustrial.

And that means Barcelona only get 50.1 per cent of future profit on club merchandise but they get an immediate cash injection to help them get a better salary cap from La Liga?

The deal is unlikely to be finalised before the end of the month even if ratified by members so it will not go into the calculation for the salary cap for next season.

There is a convoluted calculation, which subtracts projected spending on non-football costs from projected income.

And Barça’s salary cap, for want of a better expression, is grim?

Losses from previous years are factored in which is where Barcelona, who were financially devastated by shut stadiums during the pandemic, and had an out-of-control wage bill, were really hit.

That the club can only register new players if they bring in four times what they spend. If they sell De Jong for 120m euros [£102m] they can sign Lewandowski for 30m [£25.6m].

Which is not going to happen so that means they can’t sign Lewandowski?

They would need to bring in 120m to allow themselves to sign him.

Philippe Coutinho’s sale has brought in 20m euros and the club has put almost everyone up for sale with hopes of cashing in on a Samuel Umtiti, Clement Lenglet or an Oscar Mingueza but selling players in contract is difficult.

De Jong would bring in much more but he is another under contract who does not want to leave.

So they have moved on to plan B?

Well they might still need to sell players, but yes.

Signing a deal with the investment group CVC would bring in 270m euros [£230m] (40.5m of which can be spent on squad, the rest on infrastructure and debt management) in exchange for a percentage (between 8 and 10) of future TV rights deals over the next 50 years.

Barcelona rejected the idea because it was mortgaging the future of the club, now with the clock ticking on them closing the books on the 21-22 season they feel they have no choice.

But now they not only want to sign it, they want to give up more of their TV rights?

Barcelona have said up to 25 per cent of rights could be sold.

According to 2Playbook they would sign with CVC and they would give up a further 10 per cent in a second similar deal. Estimates are that this will bring in 540m euros [£461m] in total.

Why the extra deal?

The original CVC deal counts as a loan. Barcelona want to do a second deal, possibly with another investment group, for another sum of around 270m euros [£230m], that counts as investment and not new debt.

They will still not be able to spend it immediately on players if they are still having to abide by the 1:4 rule but it does mean end of year figures will be in the positive instead of the negative, debt will be reduced, and the club will increase their chances of escaping the 1:4 rule sooner rather than later – if not this July then next January.

But if the 200m from the sale of BLM won’t be completed before the new salary cap is set. And the first TV rights deal counts as new debt. Does this really help Barcelona strengthen this summer?

They also can’t include Spotify stadium sponsorship on this season’s accounts.

With a salary cap of -144m and a wage bill of around 500m euros that leaves the club needing around 650m coming in.

The 540m from sold TV rights and the 200m from the sale of BLM comes to 740m but if only 270m is immediately available the club could still need to sell players.

There are other things that will help. La Liga has agreed that losses incurred because of the pandemic can be spread across various seasons.

And if top earners are sold a greater proportion of the revenue can be spent. Of the 20m for Coutinho 50 per cent can be spent because he was a top earner at the club.

And accepting La Liga’s CVC deal will enable Barcelona to spend 40.5m this summer which ought to enable them to sign Lewandowski.

But in terms of registering the signings of Franck Kessie and Andreas Christensen and bringing in others they would need to do more.

And players sales would make it even easier?

If Manchester United pays 60m for De Jong then it frees up another 15m.

But he would then need replacing so it would depend on how much cheaper a replacement (Valencia’s Carlos Soler) would cost.

Will the members vote yes?

Probably, if the club successfully sell them the idea that TV rights and merchandising revenue will increase (so ceding a percentage of it has less effect).

The signings: Kessie, Christensen, Lewandowski and Soler (if De Jong leaves) are all in place. But they need green light.

For some it’s fortune today, famine tomorrow. For others, there’s no choice.