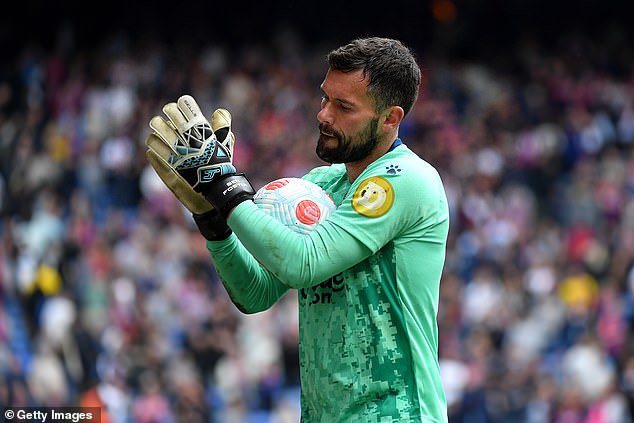 Former England international goalkeeper Ben Foster has revealed that he would be prepared to take on a supporting role at Arsenal, behind current No 1 Aaron Ramsdale.

The 39-year-old Foster is nearing the end of his Watford contract, and told his Fozcast listeners that he would love to help out a younger keeper, and believes he has what it takes to help improve Ramsdale.

However, the Premier League veteran also hinted that he would still be ready and waiting to take on a starting role if he thought that he could do a better job than the young England International.

Foster told Fozcast: ‘If I’m signing for a club as a No 2 goalkeeper, depending on who the first-choice goalkeeper is, so say it was someone like Arsenal or even Aston Villa for example where you’ve got the first choice goalie I know is a world-class goalkeeper.

‘So someone like Ramsdale or Emi Martinez, I know I’ve got a world-class goalkeeper in front of me who’s still at an age where they’re learning and they can get better – because they can, they’ve got the potential.

‘I will, at that point, say, “Right I am going to help you as much as I can to maximise your ability and make sure that you become an absolute monster, a beast, and give you all the tools that I’ve learned”.

‘I’d love to be able to do that, and I can happily go in every day knowing that’s my role because it’s an important role still, a massive role.

‘And I’d love to be able to do that and buzz off them making saves, I’d be that guy on the bench jumping up going, “Oh what a save! That’s my goalie! That’s my boy!” It would be brilliant. I would love to do that.

However, it may not be as simple as that for Foster, with Bernd Leno already occupying the supporting role between the sticks at the Emirates.

And to make matters worse, the Gunners brought in a third keeper in January, signing USA international Matt Turner from MLS side New England Revolution for a reported £5.73million.

But since losing his spot to Ramsdale, Leno is among those believed to be on the way out of the north London club over the summer, so Mikel Arteta may want to bring in a third option as extra cover.

And who better placed to take up that role than an experienced and wily campaigner like Foster, who has 92 clean sheets to his name, who can impart vital knowledge and advice to one of the youngest squads in Europe.

Foster added: ‘Don’t get me wrong, if it’s for someone like Rambo I’m still training my head off, because that’s what I’m like, I love training, I love putting the graft in.

‘Whereas, on the other side of it, if I sign for a club and they say, “We’ve got a first choice goalie but we want you to be No 2”, and when I get into that football club if I see him in training and I think I’m better than him, that will drive me even harder to prove to everyone that I’m still good to go.

‘But it’s an interesting one, I think I would, I think I’m at an age where I could be a number two, I really could. I had to deal with it last year and even at the start of this season I wasn’t playing to start with, and I’m very good at getting behind the goalie that’s playing and being a cheerleader and getting him ready for the game.

‘I think that comes with age as well, it’s something where you have to let your ego go and say, “It’s your turn, it’s your time, I’m going to help you get ready”.’