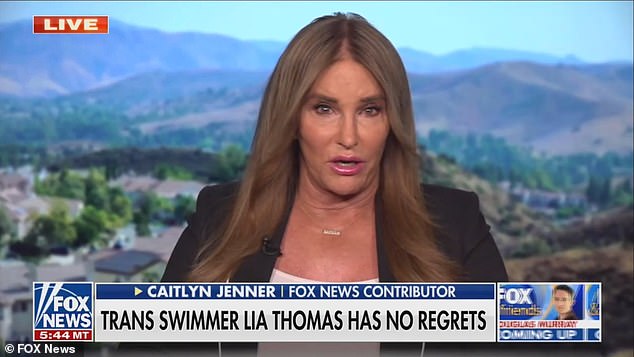 Caitlynn Jenner doubled down on her criticism of trans swimmer Lia Thomas being able to compete against girls, saying on Wednesday that she still has a male athletic advantage even after seven years of hormone therapy.

Jenner, 72, appeared on FOX News on Wednesday morning, a day after Thomas gave her first on-camera interview. She said she does not blame Thomas for taking part in the sport and that she supports her right to transition, but that it’s down to the NCAA to make stricter rules.

‘And so I’m not blaming her, I’m just blaming the system right now – that has to be seriously looked at,’ she said.

Thomas, 22, has caused a storm in the sporting world by competing as a woman after beginning transitional hormone therapy aged 19. Before that, she had competed as a man.

As a woman, she has bumped UPenn seven places up in the NCAA league tables at this year’s championships.

Now, she says she wants to compete in the Olympics and that she should be allowed to.

Jenner – who competed in the Olympics as a man and started transitioning in 2015 –  said that she does not blame Thomas for the row she now finds herself at the center of.

‘I thought she did a very good job and this is not Lia Thomas’ fault.

‘She played by the rules and she did a good job. Really, my concerns are with the NCAA. Their rules have to be a lot more stringent. They have to be more difficult.

One of Lia Thomas’s teammates told Matt Walsh in a new documentary how UPenn protected the trans swimmer’s place as ‘non negotiable’. Lia helped the team move seven places up the leaderboard from 27th to 20th

On Twitter, she added: ‘The woke world we are living in today is what has allowed for Lia Thomas to compete and take away medals from biological women.’

Thomas thinks she should be able to compete as a woman.

She says that if she is banned, other biological women who have larger hands and feet and are taller than competitors should be too.

In an interview with Good Morning America yesterday, she said: ‘I don’t need anybody’s permission to be myself.

She also said anyone who says she isn’t allowed to compete as a woman is transphobic, regardless of whether or not they support her right to transition.

‘You can’t go halfway and be like “I support trans people but only to a certain point. If you support transwomen and they’ve met all the N.C.A.A. requirements, I don’t know if you can say something like that.

‘Trans women are not a threat to women’s sport,’ she said.

In a later interview with ESPN, she doubled down.

She dismissed the controversy surrounding her place in the women’s category, saying she is now happy.

‘There’s a lot of factors that go into a race and how well you do. The biggest change for me is that I’m happy and sophomore year where I had my best times competing with men, I was miserable.

‘Having that be lifted is incredibly relieving and allows me to put my all into training and racing.’

Thomas began transitioning in 2020 aged 19. Doctors say that even though she has met hormone replacement therapy requirements, it is not enough to reverse the effects of puberty as a male to the extent needed to level the playing field

Teammates have anonymously spoken out to criticize UPenn and reveal that they were ‘silenced’ by the college.

In a new documentary about gender ideology that will air tomorrow night, the anonymous teammates said they were told never to question Lia’s place and warned that doing would seal their fate.

The message was ‘Lia’s swimming is a non-negotiable.’

‘They’ve made it pretty clear, if you speak up about it, your life will be over in some way, you’ll be blasted all over the internet as a “transphobe,” … you’ll never be able to get a job,’ one of the girls said.

‘Lia’s swimming is a non-negotiable,’ one swimmer says she was told by an unnamed college executive.