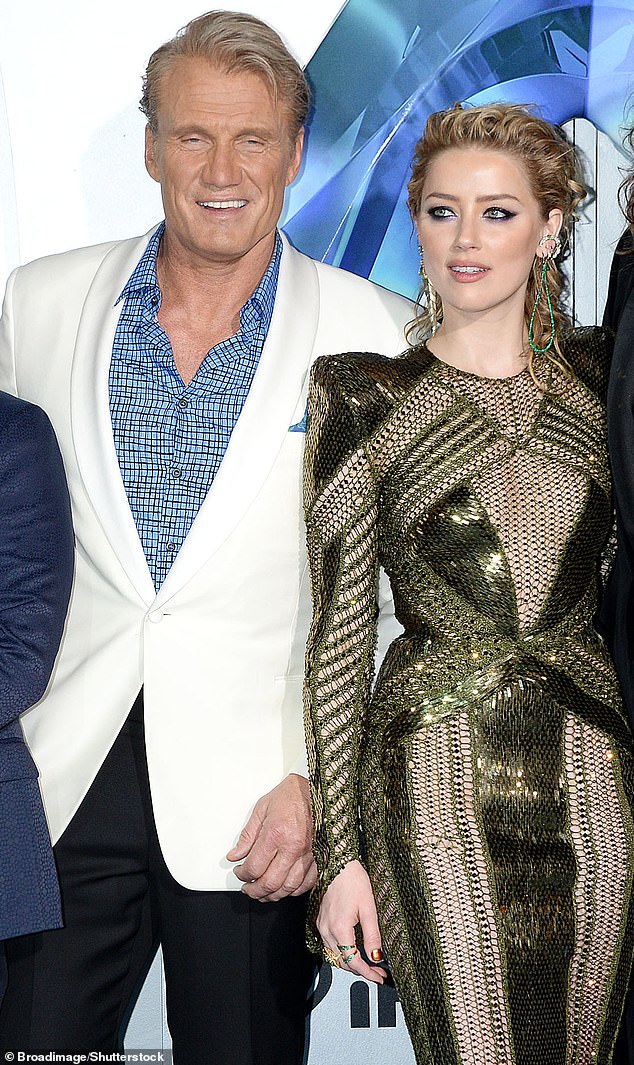 ‘She’s terrific’: Dolph Lundgren, 64, says he had a ‘great’ time working with Aquaman co-star Amber Heard… as she waits on jury for ugly defamation case with Johnny Depp

Dolph Lundgren, 64, gave his opinion on working side by side with Amber Heard.

The two actors have worked closely together to film the first Aquaman movie and the sequel, which is set to be released in 2023.

In a conversation with Redline Steel CEO, Colin Wayne via Instagram Live, Lundgren stated that Heard was ‘great’ to work with. ‘I worked with her on the first Aquaman, now the second one. We shot last fall in London,’ the actor said.

She is fine! Dolph Lundgren has said that Amber Heard was ‘great’ to work with on Aquaman; seen at the premiere of Aquaman in 2018

Two stars: The two actors can be seen playing their roles of Mera and King Nereus in the Aquaman film

He played the role of King Nereus in the franchise as she stars as Mera.

The Rocky IV star discussed how the 36-year-old not only got along with him, but also the other cast and crew.

‘She’s terrific, I had a great experience with her. She’s very kind, nice to the crew, nice to everybody, just down to earth. She had her own newborn baby with her on set with the nanny which was kind of cute,’ he added.

A petition to have the actress’ character, Mera, removed from Aquaman And The Lost Kingdom has been circulating amidst the defamation trial between Johnny Depp and his ex-wife

The petition has reached 4.5 million signatures.

Casual stroll: The 64-year-old actor was spotted out and about in Los Angeles

Spotlight: The Aquaman star is seen posing for the cameras at the red carpet premiere of the first Aquaman movie in 2018

Amber has condemned the campaign to have her removed as Mera in the second film and has denied that the outcome of the court case will have any impact on the Aquaman movies.

The 36-year-old actress said, ‘Paid rumours and paid campaigns on social media don’t dictate (casting decisions) because they have no basis in reality. Only the fans that actually made Aquaman and Aquaman 2 happen. I’m excited to get started next year.’

Heard’s role as Mera has been reduced in the second film, and she won’t be given a lot of screen time, it has been claimed.

The trial has almost come to an end as the jury’s final verdict is still in the works.