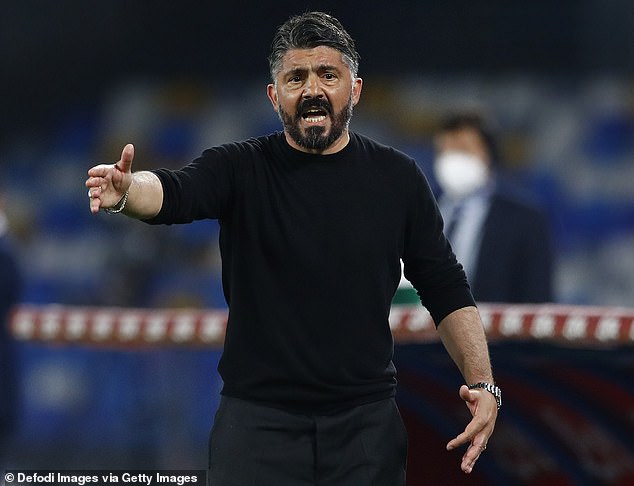 Gennaro Gattuso is set to meet with Valencia owner Peter Lim in Singapore on Wednesday as he eyes a potential return to management.

The former AC Milan and Italy midfielder has been out of work since leaving Napoli last year, where he collected his first piece of silverware as a coach by winning the 2020 Coppa Italia.

While Valencia do not have a vacant managerial position, with Spaniard Jose Bordalas currently in the hot-seat, Gattuso is still being heavily linked with a move to the Mestalla ahead of the 2022/23 campaign.

And Sportsmail understands a meeting with Lim in his native Singapore is planned on Wednesday, which suggests things are heading in the right direction.

Valencia endured a frustrating season under Bordalas, finishing 11 points adrift of a European spot down in ninth place.

The 58-year-old still has one year to run on his contract, however both he and Valencia have the option to end that agreement earlier than anticipated.

Doing so would leave Lim free to bring in Gattuso, who is keen to embark on the seventh chapter of his coaching career this summer.

Lim is now in charge of the entirety of Valencia’s football operations once again after sacking president Anil Murthy, who was dismissed after audio footage emerged in which he allegedly describes Liverpool and Newcastle as ‘s***’ cities while also threatening to vilify Valencia players in the media if they forced an exit.

Gattuso ventured into management while finishing his playing career out in Switzerland with Sion, who handed him the reins when then-boss Victor Munoz was demoted to a scouting role after a heavy 4-0 defeat in February 2013.

The World Cup winner only spent three months in charge of Sion, winning just three of his 12 matches at the helm, before enjoying another brief stint back in Italy with Palermo, who sacked him following a poor opening run of two wins in six games.

A spell in Greece with OFI proved just as unsuccessful, with a return of five wins in 17 meaning he was dismissed after six months, yet Gattuso’s managerial career finally began to take off when he joined Serie C club Pisa in 2015.

In his debut season with Pisa he guided them to Serie B at the first time of asking, before unexpectedly handing in his resignation due to ‘serious, constant and unacceptable’ problems at the club. Bizarrely, he then returned one month later and took Pisa back down to the third tier before leaving for a second time.

Despite his rollercoaster ride with the Tuscany outfit, old club Milan came calling when they offered their former tough-tackling midfielder the Under-19s job in May 2017. Merely four months later, however, he was promoted to first-team head coach when Vincenzo Montella was sacked.

He later returned to his beloved Milan after brief spells in charge of Pisa, OFI and Palermo

His greatest success so far came in his last post at Napoli, where he claimed the Coppa Italia

Gattuso guided the San Siro club to sixth and fifth-place finishes in his first two seasons, only to leave by mutual consent in 2019. At the end of that year Napoli brought him to the Stadio San Paolo and reaped the rewards, capturing the Coppa Italia in his first half-season.

Yet after missing out on Champions League qualification the following year, Napoli president Aurelio De Laurentiis decided to end his 18-month spell as head coach.

Since leaving Gli Azzurri Gattuso has been linked with a number of posts, including in the Premier League with Tottenham.

Spurs appeared set to appoint him as manager last summer, only to U-turn on the decision amid a backlash from supporters. Before that, Fiorentina had officially unveiled Gattuso as their new head coach, yet both parties rescinded the agreement one month later.