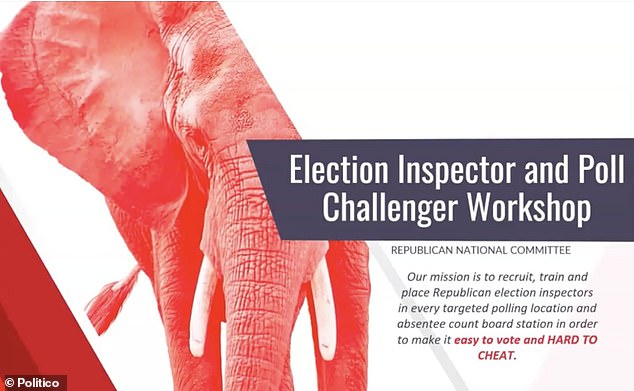 The Michigan GOP is building a vast network aimed at challenging and overturning election results in the battleground state’s heavily Democratic areas – using an ‘army’ of specially-trained poll workers and attorneys, a new report revealed on Wednesday.

Michigan Republicans are training right-wing activists to be poll workers via an ‘Election Inspector and Poll Challenger Workshop’ series, according to Politico.

They’re also recruiting enough attorneys to set up a ‘hotline’ for those poll workers to then reach out to on Election Day in an effort to challenge results in areas like Detroit, where the majority of poll workers have traditionally been Democrats as a result of the voter makeup there.

While poll workers do generally undergo state-driven training before Election Day, it’s not common for political parties to lead lessons themselves.

‘It’s going to be an army,’ the Republican National Committee’s election integrity director for Michigan, Matthew Seifried, said of the legal network they hope to build up behind the poll workers.

In an October 5, 2021 recording obtained for Wednesday’s report, Seifried said during one of their training sessions: ‘We’re going to have more lawyers than we’ve ever recruited, because let’s be honest, that’s where it’s going to be fought, right?’

He described the state party’s reasoning for the new strategy in a separate recorded meeting with Republican activists in November.

‘Being a poll worker, you just have so many more rights and things you can do to stop something than [as] a poll challenger,’ Seifried said.

In a slide obtained by Politico, the Michigan Republican Party appears to be recruiting poll workers in ‘targeted’ locations, which the outlet’s report suggests are heavily-Democratic districts like Detroit

It also goes through the steps of training GOP activists in what to spot when they are challenging a vote. The last step encourages them to call a ‘hotline’ comprised of a vast network of lawyers who are sympathetic to their cause

Last month the Michigan RNC reportedly submitted a list of nearly 1,000 people to be poll workers to the Detroit clerk’s office, who then will likely pick names from that list ahead of Election Day, Wednesday’s report suggests.

It was described as a plan to ‘trap’ Democrat clerk Janice Winfrey by Tim Griffin, the legal counsel of an ‘election integrity’ group that worked with Donald Trump’s team to overturn the 2020 presidential election.

He reportedly described a plot to corner Winfrey by making her either pick questionable names from the Republican-submitted election worker list or set up the basis for a lawsuit over her rejection of them in a June 2021 recording.

He described the list as names ‘whom she’s not going to hire’ but whose rejection would ‘up the door for a mandamus lawsuit for them to start following the law.’

‘Apparently they think I’m stupid,’ was Winfrey’s response to hearing about the plan.

She did add, however, that ‘a good number’ of those 850 names sent by the state RNC will get the job, provided they attend mandatory classes and are registered to vote themselves.

Winfrey said her office always reaches out to both state parties and ‘we get what we get.’

While Seifried reportedly hold election worker training sessions in Michigan, Griffin has been meeting with Republican activists to help identify district attorneys throughout the country that are sympathetic to their politics and then wade into electoral disputes at a moment’s notice.

Griffin outlined a goal of a ‘nationwide district attorney network’ to help challenge election results in a late September meeting, the report claims.

‘Your local district attorney, as we always say, is more powerful than your congressman,’ he can be heard saying.

fried’s sessions, meanwhile, potential GOP-recruited poll workers are shown a slideshow – two pages of which were obtained by Politico.

One which appears to be the title slide shares the mission statement: ‘Our mission is to recruit, train and place Republican election inspectors in every targeted polling location and absentee count board station to make it easy to vote and HARD TO CHEAT.’

Another slide is titled ‘How to Challenge a Voter.’

The first direction states, ‘Tell the poll worker, “I would like to challenge this voter”.’

A designated official then questions the voter, with the RNC pointing out that the line of inquiry must be ‘confined to the person’s qualifications as a voter’ including details on citizenship, age and residency, among others.

The voter then submits a ‘challenged ballot’ if they’re proved able to vote in the precinct. But the training slide shares with activists specific circumstances to watch for in which the person could be disqualified.

A ‘complete record of the challenge’ is then recorded. The RNC’s final step encourages the poll worker to then call the ‘hotline’ of attorneys ready to dive into an election challenge.