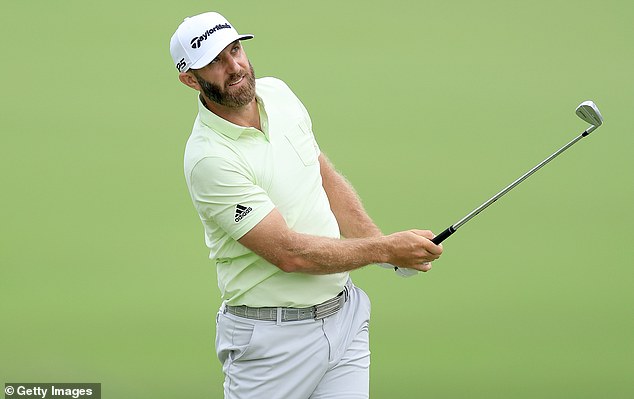 Johnson, 37, who won The Masters 18 months ago, is the biggest drawcard ahead of the inaugural tournament of the Super Golf League from June 9 at the Centurion Golf Club outside London.

With even the last-placed finisher guaranteed to take home almost $170,000 in prizemoney at Centurion, many of the world’s top golfers have understandably jumped ship to the new tour and abandoned the U.S.-based PGA Tour.

Veterans such Sergio Garcia, Louis Oosthiuzen, Lee Westwood and Ian Poulter will also tee off at Centurion for the 54-hole event.

Norman has attracted plenty of criticism as CEO of LIV Golf, with a host of critics slamming the mega-rich series

Two-time major champion Johnson, who in February said he was ‘fully committed’ to the PGA Tour, ultimately decided the riches on offer were too good to pass up.

‘Dustin’s been contemplating this for the past two years and decided it was in his and his family’s best interest to pursue it,’ his agent David Winkle told the Golf Channel.

‘He’s never had any issue with the PGA Tour and is grateful for all it’s given him but in the end felt this was too compelling to pass up.’

Norman said Johnson’s defection and that of other high-profile stars indicated they had ’emphatic belief in our model and confidence in what we’re building for the future’.

‘Free agency has finally come to golf,’ Norman said in a statement.

‘This is an opportunity to start a movement that will change the course of history by bringing new and open competition to the sport we all love.’

The world’s top 10 ranked golfers – including Australia’s Cameron Smith – have all turned their back on the mega money up for grabs, believed to be $255 million for the tour’s eight-tournament card for 2022.

Norman has come in for strong criticism as CEO of the new tour’s promotional company LIV Golf, with critics slamming the mega-rich series as a means of ‘sports washing’ for Saudi Arabia’s bad human rights record.