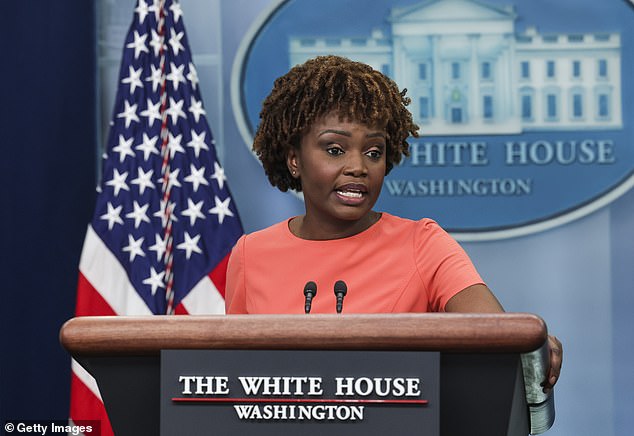 White House press secretary Karine Jean-Pierre said she ‘did not hear that part of the speech’ when asked Tuesday about claims made by President Joe Biden that he was ‘appointed’ to the Naval Academy the same year he was already finishing college.

‘I need to read it myself, and just go back and see what you’re talking about exactly. I can’t speak to it right now,’ Jean-Pierre told CBS News’ Ed O’Keefe during the press briefing, as he had asked whether Biden could be confused about the timeline.

At the top of Biden’s commencement address to Naval Academy graduates Friday, he told a story about how Delaware Sen. J. Caleb Boggs – who he ran against in 1972 – had tried to get him into the Annapolis school seven years before.

President Joe Biden appeared at the graduation and commissioning ceremony for the U.S. Naval Academy in Annapolis, Maryland on Friday. Biden told a confusing story at the top of his speech about how he had been ‘appointed’ to the Naval Academy in 1965

‘Before I begin my speech, a thought crossed my mind as I was told the Class of ‘72 is here,’ Biden told the crowd. ‘I was appointed to the Academy in 1965 by a senator who I was running against in 1972.’

‘I didn’t come to the Academy because I wanted to be a football star,’ the president continued. ‘And you had a guy named Staubach and Bellino here. So I went to Delaware.’

Bellino and Staubach are the only two football players out of the Naval Academy to win Heisman trophies, doing so in 1960 and 1963, respectively.

Boggs had remarked during a debate that if Biden had gone to the Naval Academy, he would have been sidelined the year of their race.

Students who go to the Naval Academy do five years of active service after graduation.

‘But all kidding aside, the best line of the debate was – after it was all over, the announcer – the questioner who was a good guy but supported my opponent – who was a good man as well, I might add – and he said, “Senator Boggs, you have anything else you want to say?” And he said, “Yes, just one thing.” And he took the microphone. He said, “You know, Joe, if you had accepted my commission to the Aca- – my appointment to the Academy,” he said, “you’d still have one year and three months active duty, and I’d have no problems right now,’ the president said.

The 1965 date doesn’t make sense as Biden was already graduating from college then – and the Naval Academy doesn’t offer graduate programs.

The New York Post pointed out in its initial report about Biden’s speech that the now president’s 2008 biography never mentioned that he considered going to the Naval Academy.

DailyMail.com followed up on O’Keefe’s question and didn’t receive an answer by Tuesday night.