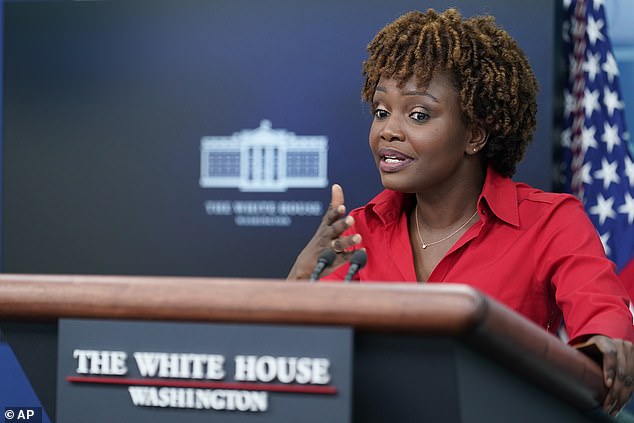 President Joe Biden’s new press secretary Karine Jean-Pierre struggled through a one hour and four minute briefing Wednesday, admitting she hadn’t listened to a question-and-answer session Biden had with reporters just minutes before.

‘I was in my office. I did not actually hear what the president said. I do not like to speak on something without having a conversation with the president first,’ Jean-Pierre said.

She was unable to answer why Biden didn’t know about the brewing baby formula shortage for two months.

President Joe Biden’s new press secretary Karine Jean-Pierre struggled through a one hour and four minute briefing Wednesday, admitting she hadn’t listened to a question-and-answer session Biden had with reporters just minutes before

President Joe Biden said he was informed of the baby formula crisis in early April, nearly two months after Abbott recalled formula from a Michigan factory, which created a shortage. At an event with CEOs Wednesday, they said they were aware of how bad it could get

At the conclusion of an event on the baby formula crisis – which was held directly before the press briefing Wednesday – Biden told reporters in the room that he was first informed of the baby formula shortage in ‘early April.’

Several CEOs who Zoomed into the White House event said they knew as early as February, when Abbott’s formula was recalled, that there would be a problem.

‘We knew from the very beginning this would be a very serious event,’ said Robert Cleveland, an executive at Reckitt.  ‘We were aware of the general impact that this would have.’

‘Was someone called here at the White House to say this could be an issue that requires presidential involvement?’ CBS’ Ed O’Keefe asked Jean-Pierre.

‘So I don’t have the timeline on that,’ the press secretary answered. ‘All I can tell you as a whole-of-government approach we have been working on this since the recall in February.’

ABC’s Mary Bruce later pressed Jean-Pierre saying that it sounded like even if the president had known sooner it wouldn’t have improved the response.

‘No, that’s not what I’m saying,’ Jean-Pierre. ‘I’m saying that we have been working on this since we have found that we found out about the recall since day one.’

‘That’s what I’m laying out to all of you as a timeline,’ she continued.

‘As a whole-of-government response, we have taken this on since the first day we learned about the recall,’ Jean-Pierre added.

Jean-Pierre is only two and a half weeks into her tenure as press secretary, and hasn’t held briefings every day because of Biden’s recent trip to South Korea and Japan.

During Wednesday’s briefing, she got question after question about the baby formula shortage’s timeline.

‘Was there a breakdown in the process here that somebody failed to inform him?’ asked CNN’s MJ Lee.

Jean-Pierre again said she hadn’t talked to the president about the comments he made.

Lee pointed out that the president said he didn’t understand how bad the issue was until April, while Jean-Pierre said the White House was working on the problem since February.

This prompted Jean-Pierre to read from her briefing book.

‘So the actions across the government began day one,’ she said.  ‘The White House has been in close, regular contact with agencies responsible for addressing these issues since then, while these action made serious progress, including by ensuring there was more infant formula coming off factory lines than before the recall. It’s clear there is more work to be done and more levers to be pulled, which is why you see higher-profile actions this month.’

She was then pressed, again, why the president wasn’t aware of this work being done.

‘The president has multiple issues crises at the moment,’ she said. ‘So that’s number one to remember. But the most important thing is that as a White House, working with the inter agencies, we have been working on this since day one, since the recall. And this is his White House,’ she said.

‘When are you guys going to admit you were wrong about inflation?’ he asked Jean-Pierre.

‘No easy questions today, huh?’ she said back.