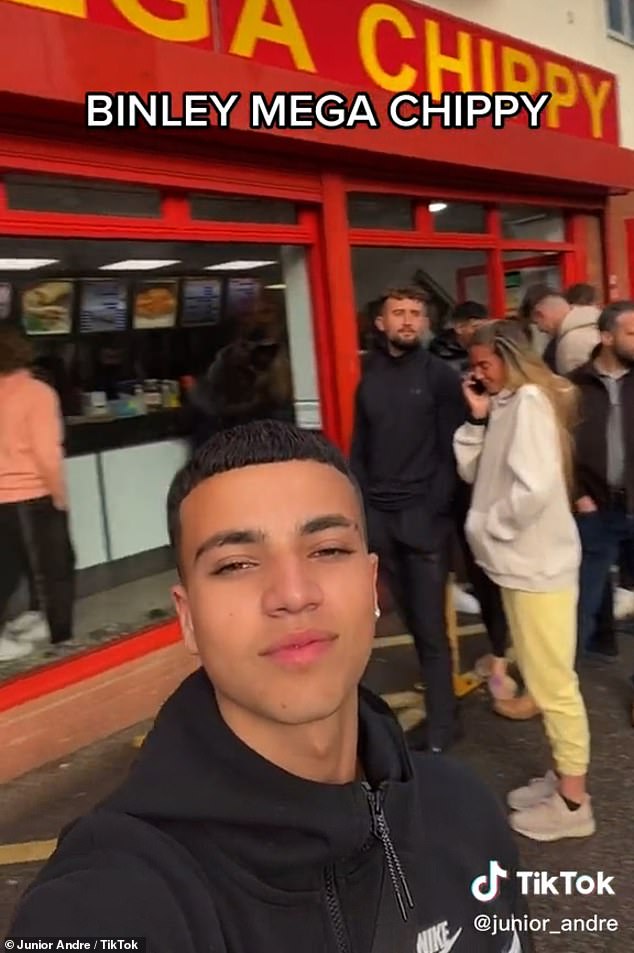 By Bethan Edwards For Mailonline

Junior Andre has become a global sensation after he visited Binley Mega Chippy and filmed a TikTok video outside.

The chip shop in Coventry has been inundated with tourists pouring in from as far afield as Portugal and Australia after a catchy music video was posted on TikTok.

Now Peter Andre and Katie Price’s 16-year-old son Junior has been caught up in the fanfare after he filmed himself outside showing a line of customers queuing out of the shop.

Exciting: Junior Andre has become a global sensation after he visited Binley Mega Chippy and filmed a TikTok video outside

Binley Mega Chippy attracts thousands of customers from around Britain and the world after a fan raved about it on social media.

Owner Kamal Gandhi, 70, has now seen profits rocket by a whopping 30 percent, with queues of fans regularly seen outside.

Junior was seen performing his new song Slide outside the now-famous chippy.

He started it: ‘I spy with my two eyes, something beginning with B.’

The video then changed to Junior standing outside the fish and chip vendor as the words ‘Binley Mega Chippy’ played over some plinky-plonk music.

The clip rapidly went viral on TikTok with over 2.6million people viewing it.

Viral: The 16-year-old son of Peter Andre and Katie Price seemed in high spirits as he filmed himself outside Binley Mega Chippy in Coventry

He has met people from Australia, Ireland and even a holidaymaker from Texas, USA.

Junior’s debut single Slide has gone down very well with fans, with one remarking: ‘What a tune!’ while his musician father Peter, 49, gushed that he ‘couldn’t be prouder’.

TikTok: Junior was seen performing his new song Slide outside the now-famous chippy. He started it: ‘I spy with my two eyes, something beginning with B’

It comes after Peter was previously full of praise for son Junior as he discussed the teen following in his footsteps and embarking on a music career.

The Mysterious Girl singer appeared virtually on Lorraine last month and told host Christine Lampard that he is ‘proud but also scared’ for his budding musician son.

During the chat, Peter explained: ‘I took him to the studio and he got in the booth and everyone was like ‘oh!’. And I said ‘look, lets focus on him for right now.”

Peter revealed that he is his manager in a way, but wants to make sure he has freedom to do his own thing, saying: ‘I am managing him in the sense I am there with him all the way. We want to give him some artistic freedom.’

The dad-of-four appeared on Australian singing contest New Faces at aged 16, rising to fame with his singles Mysterious Girl and Flava.

It seems Junior is emulating his dad’s career, as he has been teasing new music for the last few months with snaps from the studio – at the same age his dad took on the spotlight.

Peter admitted he had some fears but understood his son, explaining: ‘It makes me proud by also scared, at 16 that is what I wanted, my parents were scared and I had to prove to them that I would be okay.’

But over 30 years on, Peter has seen more of the industry and shared that he knows ‘both sides’, as he told Christine: ‘I have seen the good and the bad in the industry. I know the pitfalls.’

Famous dad: Junior’s debut single Slide has gone down well with fans, with one remarking: ‘What a tune!’ while his musician father Peter, 49, gushed that he ‘couldn’t be prouder’